Coming home from the show, one of the things I've most been fearing since getting a truck and trailer finally happened: engine trouble on the freeway while hauling!  We had been driving about 1.5 hours with the temperature hovering right around 100.  Cupid had his fans going, and I had A/C on.  I started noticing an odd smell coming from the A/C.  I checked the temperature gauge and it was normal, so I turned the A/C off and continued going but saw the temperature gauge quickly start to climb.  I drove just a bit further to see if there was an exit or at least a pull out or something, but not seeing anything I just pulled over onto the shoulder.  It was just wide enough that we were off the road and I could open my door and walk to the front to pop the hood as cars and semis zoomed by so fast and close the truck and trailer were rocking.
OK so confession time .... despite my father being a car mechanic I don't really know that much about cars.  I can change a tire and have changed my own oil but that's about it.  So when I pop the hood I don't necessarily know what I'm supposed to look for.  But even I had some idea the car is overheating, check coolant levels - confirmed the reservoir was empty.  Checked pressure in hose - seemed low but ... ??? what do I know.  If I had not had Cupid in the trailer I would have called roadside assistance at this point, definitely not drive any more to prevent further damage, but I didn't think that was a great option with Cupid sitting there. 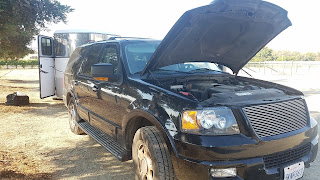 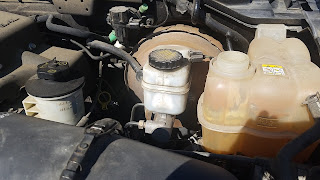 Luckily what I did have is plenty of water, since my trailer has a water tank.  So I used a water bottle to fill the reservoir.  It did not seem to be leaking. I checked the map and realized where I was - very close to a place we've shown before.  In fact it was the next exit, and I knew there was a gas station at that exit.  I pulled back onto the road and drove slowly towards the exit, keeping an eye on the temperature gauge which stayed at the halfway mark.  I bought several gallons coolant at the gas station and filled it.  But I didn't think to buy a funnel and made a bit of a mess pouring it, so then it was impossible to tell if it was leaking.  Whoops.
I was still an hour from home, and knew I could not drive that far.  I considered my options - trying to arrange someone to come pick Cupid up, either from my barn or the trainer who was coaching me at the WE show who hadn't left yet and would be driving through that way in another hour or two.  But first I thought I'd try calling the place down the road where Cupid and I had shown before (Greenville Equestrian Center).  I got the barn owner's voicemail, which said if it's urgent send her a text.  So I quickly summarized are situation, letting her know I'm not a boarder but have been to her facility for shows and it was an emergency situation, could I please bring Cupid there for the night while I get my truck looked at.  She called me back right away, and said she was not at the barn but would call her staff and have a stall ready.  She was super nice, and gave me the name of her mechanic.
So with the car full of coolant I went down the road and Cupid got a nice cozy stall. He seemed no worst for the wear, rolling in his shavings before hitting his hay. 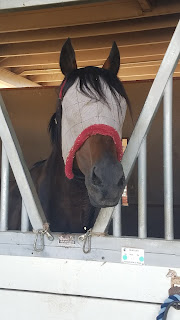 Since it was Sunday late afternoon when the problems started, I waited until the next morning to call the recommended mechanic, who said they could look at the truck that day.  So I called my insurance company and had them tow the truck from the barn to the mechanic.  Luckily it was just a valve that needed replacing, not a total blown radiator, and seems fine now with that fix.
I haven't really looked into US Rider - I've heard mixed reviews.  But it's something to consider if I'm going to do more longer distance hauling.  I was really lucky that my breakdown happened where it did, and that Greenville was kind enough to put us up for the night.  And also that my repairs were not something very expensive!
Posted by Training Cupid at 3:26 PM