Since we were unable to leave the property for so long, my coach and barn manager got together and created a new little grass jumping field to play on!  This was a largely unused flat area in the back of the property.  It used to be a jumping field years and years ago, then was maintained as a lunging area for a while, but mostly just sitting there the past few years.  I'm not sure what exactly they did, but it was somehow packed down and rolled out.  It is still not totally even, and we have to remain vigilant for gopher holes, but the horses seem to be handling it well. 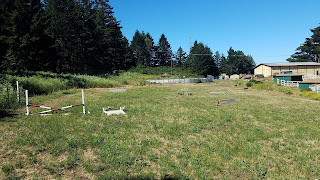 The lunged Cupid before I rode on it, both to make sure he was not too excited and also to see how he handled the terrain.  (Which I was nicely asked not to do again, but no regrets.  And I did constantly move my circle to not cause a wear path.)  He was fine at first, but did show off some of his athleticism when I sent him over the wall and coop!  So that did make me a little nervous, but I trotted and cantered him around, then trotted over some poles, and ended going over the cross rail and caveletti a few times which Cupid was really good about.

The second time we went there we jumped the cross rail and the line of stumps.  I thought for a moment that Cupid was running off with me after the cross rail, heading back to the barn, but then I realized that I had kind of just stopped riding him.  When I sat up and asked him to turn he did willingly.

I think this will help me build my confidence.  The more good experiences we have the easier it will get.  It's there so I can use it whenever I feel up to it.  And if I get there and "chicken out" I don't have to feel bad like if I went through all the trouble of trailering him somewhere to school and also had to pay a day fee to do so!
Posted by Training Cupid at 2:31 PM