I've been following Amelia Newcomb, a dressage rider in So. California, on social media for a while now.  She regularly puts out short, high quality videos generally each addressing a specific riding issue.  She has helpful exercises, and what I particularly like is she generally shows common "wrong ways" people do something and how to fix it.  She also has a few workout videos I've been doing, along with the "MadFit" workout videos on YouTube.

It was actually right before the current shutdown that she announced new Training Level and First Level courses, which unlike most of her content have a fee but also include a video review of you riding a test.  Since I have been enjoying her free content for a while I decided to support this - I figured even if it's not as helpful as I hoped I have learned a lot over the past few months and want her to continue making videos!  Plus at the time I was still planning on our First Level debut coming up so the First Level course was timely.  (Now I don't know when we'll show, and will probably do Training just because it's been a while, but hopefully it will still be this year!)

The course includes a demonstration of each First Level test in full, and then additional videos and some written material breaking down moves, discussing directives and expectations, and some general tips.  I'm not sure how I'll get a video to submit, but I'll figure it out. 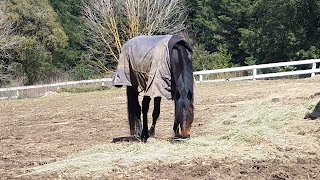 Cupid has been feeling really good our last few rides.  I switched back to our Myler, but I feel like it's a bit easier getting him rounder in the single joint snaffle.  But even with the Myler it's getting more consistent, I've been getting fairly good energy out of Cupid (trying not to settle for less!), and our lengthenings are coming along.  Overall I'm feeling pretty good about where we are.  Since we're not having lessons currently we may not necessarily move forward much but are definitely focusing on improving what we've been doing.
Posted by Training Cupid at 8:04 PM