During the weekend I was able to spend all da Saturday and Sunday with Cupid, well in between doing the barn chores I do in exchange for my lessons. On Saturday we worked on ground manners and learning "whoa" and "walk." We also worked on standing tied. He does not like to stand still, either while being led or when tied. Previously I think he was only tied in his stall, not to a hitching post, so I wasn't sure what he would do and took it very easy only loosely tying him for very short amounts of time. But then I realized that though he moves around he doesn't pull back or do anything too bad, so it's probably better for him to be tied for longer and just get used to it. I also introduced him to cross ties. We went through them during his walks the last few days and I stopped and had him stand in the spot without actually being tied the first few times. Then I tried attaching the cross ties. He was pretty good, he took a few steps forward and a few steps backwards but didn't panic. On Saturday he also got a bath. He has very thin skin and didn't seem to like the water hitting him very much and picks up his legs if I put the water there. Sunday morning I went out to the stable and saw Cupid's right hind leg was quite swollen. Poor baby, I don't know what he did during the night to get hurt. I cold hose his leg, which he didn't really like very much and didn't want to stand and kept picking up the leg. But there was a giant puddle in the wash rack and he walked right in and stood in the puddle no problem. Then I put him in a stall with an ice boot on. We did this several times throughout the day. He was a very good patient and snoozed during most of the day. His neighbor, who was also inside because of an injury, was not happy to be in the stall instead of turned out and spend most of the day either whinnying, pawing/banging on the door, or flinging his blankets off the bar outside the stall. 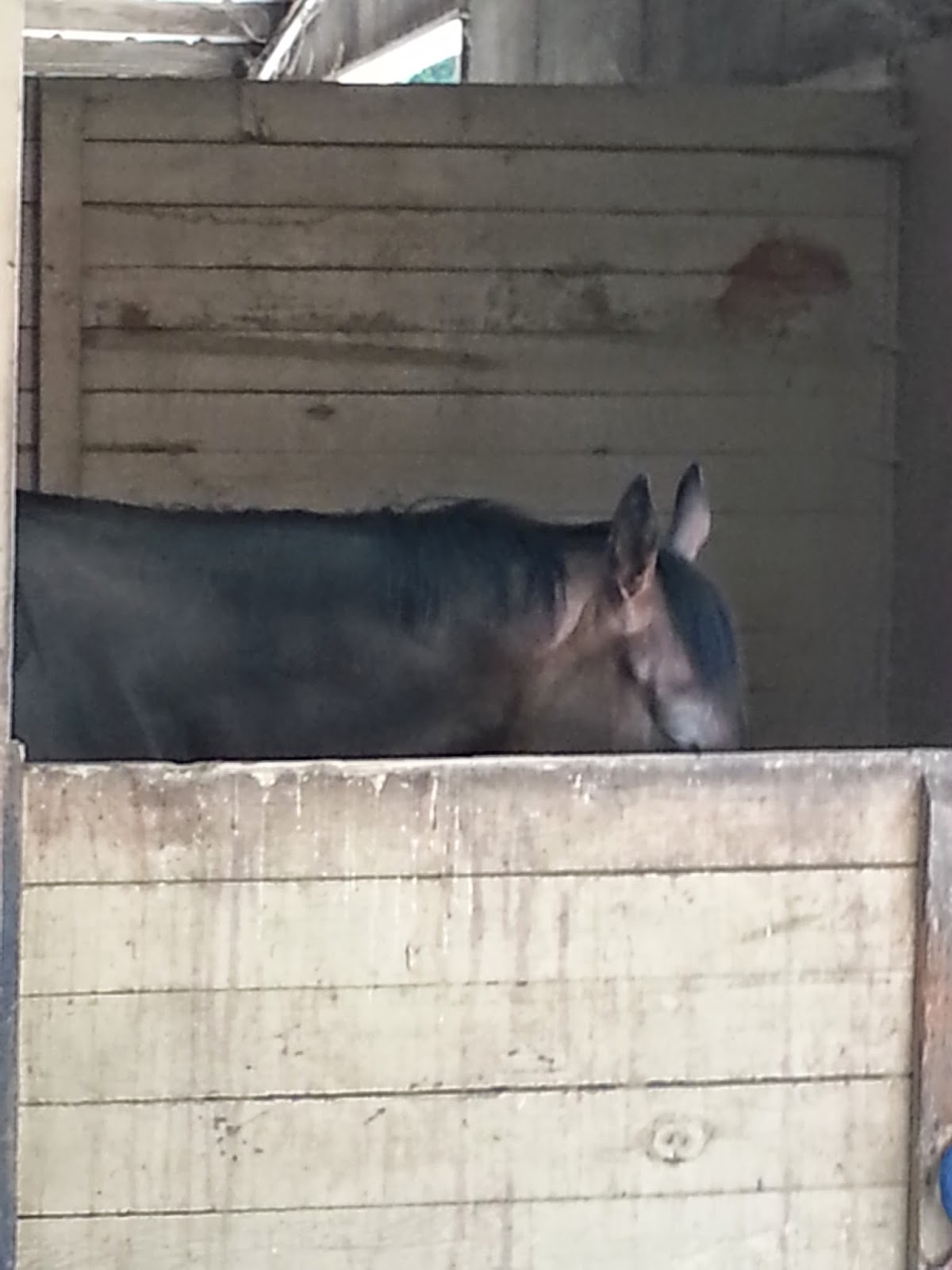 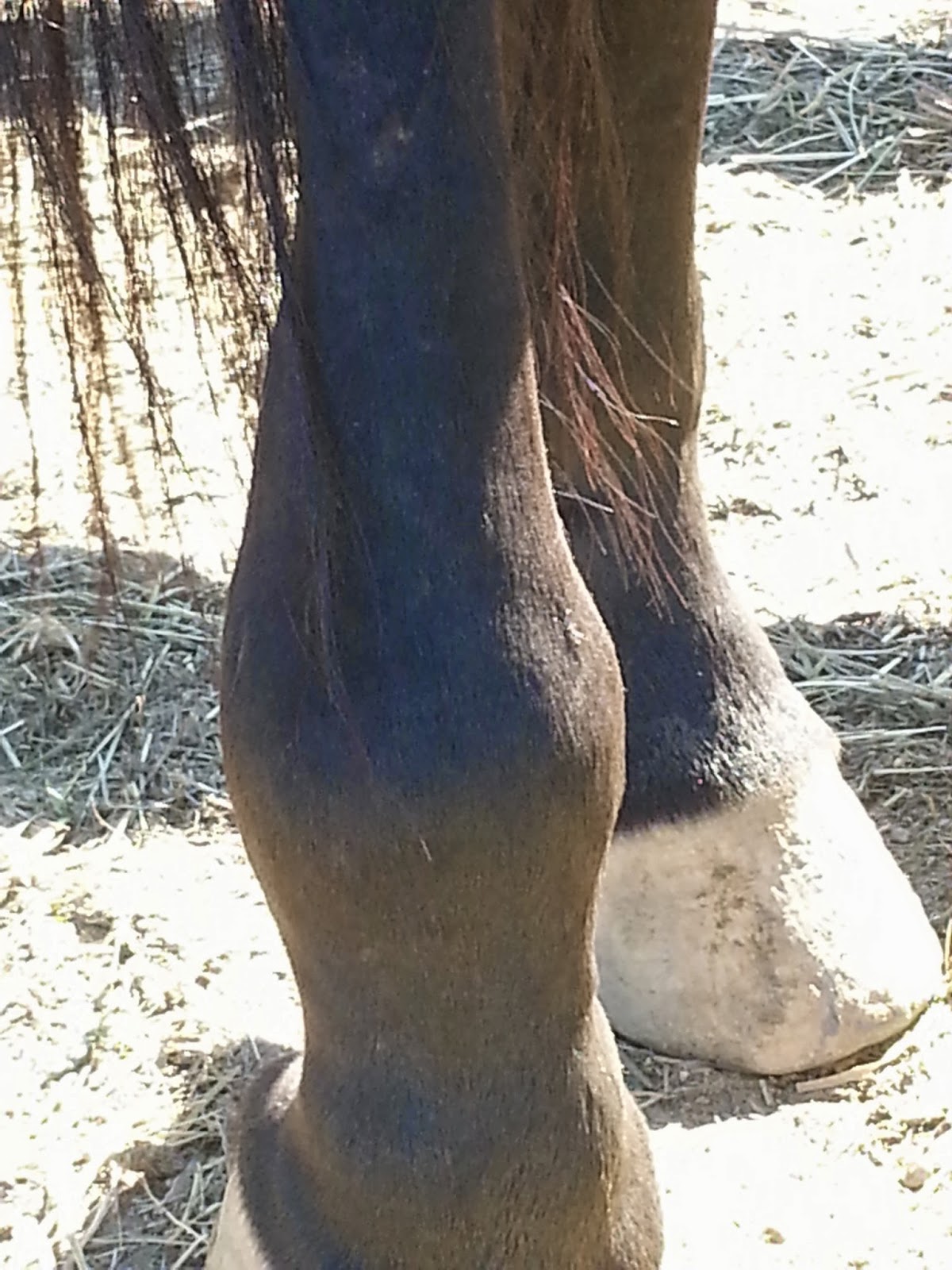 Posted by Training Cupid at 9:19 PM No comments:

Cupid arrived at his new home, a boarding stable about 15 minutes from my house, on a Monday night after about a two hour trailer ride.  He was looking around a lot, but did not act up.  There was a box stall ready for him with lots of shavings and a pile of hay.  He laid down in the shavings within about 10 minutes and enjoyed his dinner.  I noticed that the latch on the door did not have a safety chain and was concerned because Cupid likes to play with things, so I tied it with baling twine for extra reinforcement.  He also was chewing the cross tie hanging next to the stall so I took it down before he chewed it apart and we get into trouble our first day!
Cupid spent his first full day in the stall, and seemed pretty relaxed.  I came out in the morning to check on him before work, and then came back after work.  In the evening it was time to introduce Cupid to his new pasture mates: Legend, a huge older Hanoverian gelding; Bruno, also an ex-racehorse; and Bo, a young Oldenburg gelding.  Cupid is very friendly and likes other horses so cautiously walked up to the other horses.  When they came to him he lowered his head and made his "I'm just a baby not a threat" face.  ("A baby horse coming up with their head low and stretched out, clacking their teeth is not trying to bite or be aggressive. It is showing respect and asking to be allowed in close to make friends." - http://thinklikeahorse.org/index-3.html#1)
Cupid's new home is a lot colder and foggier then where he came from.  I was worried about him being cold and thought he may need a blanket.  I measured him as 68".  This is very small!  My friend who boards a large pony at the same barn thought I messed up because the pony is 72", but though Cupid is a bit taller than the pony his back is indeed shorter.  My trainer let me borrow a blanket, but it was too big and came off him.  I felt bad because it was probably scary for him when it was hanging off him half off.  Sorry Cupid!  I ordered a new blanket in the correct size and should have it next week. 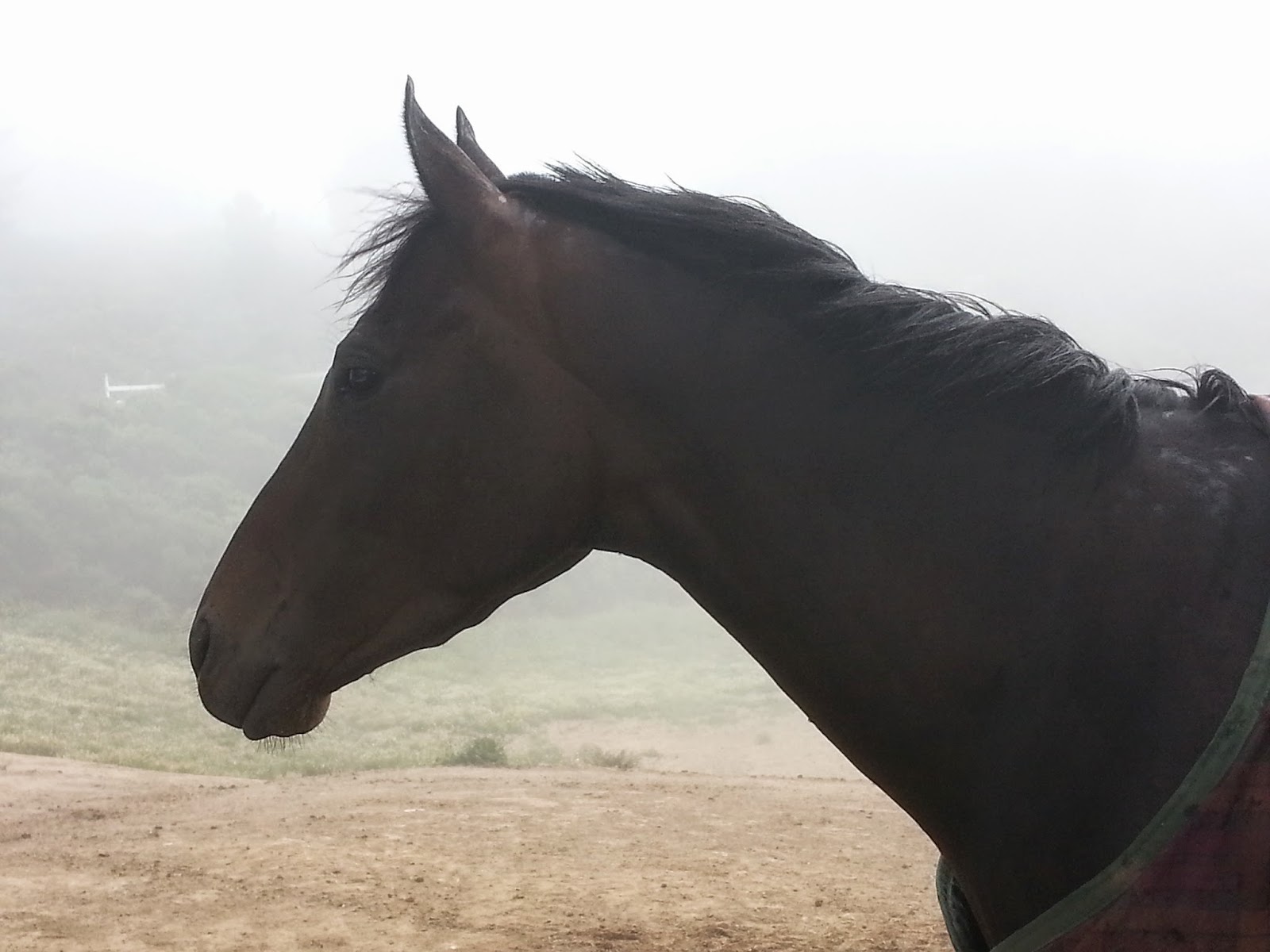 During the first week I came out every morning and evening to spend time with Cupid, just grooming him and walking him around the property and turning him out in the evening.  On Thursday he got a pretty good bite mark on his side.  It's hard to stand back and let him get hurt but I know it's part of the process of him joining a new herd. 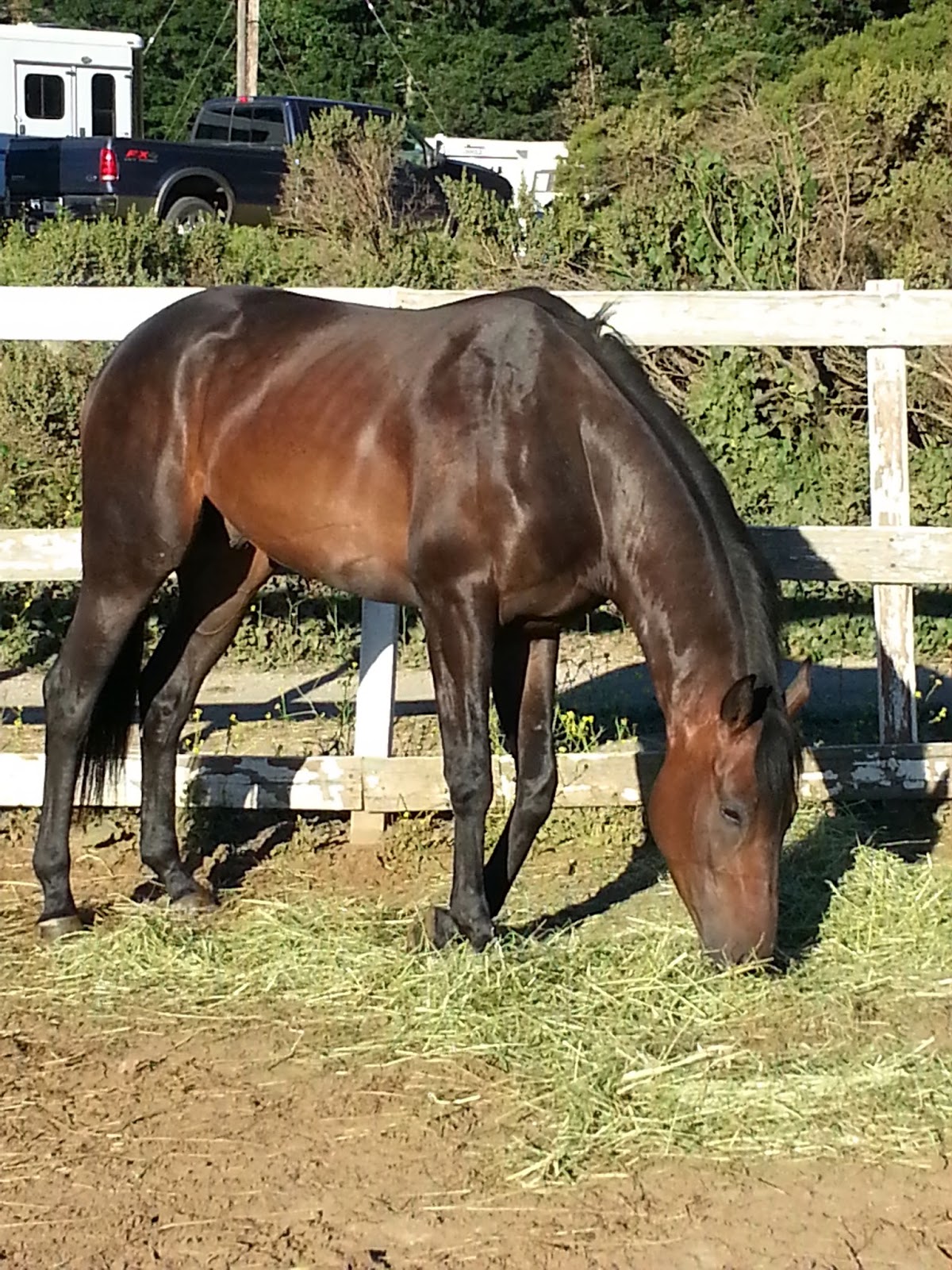 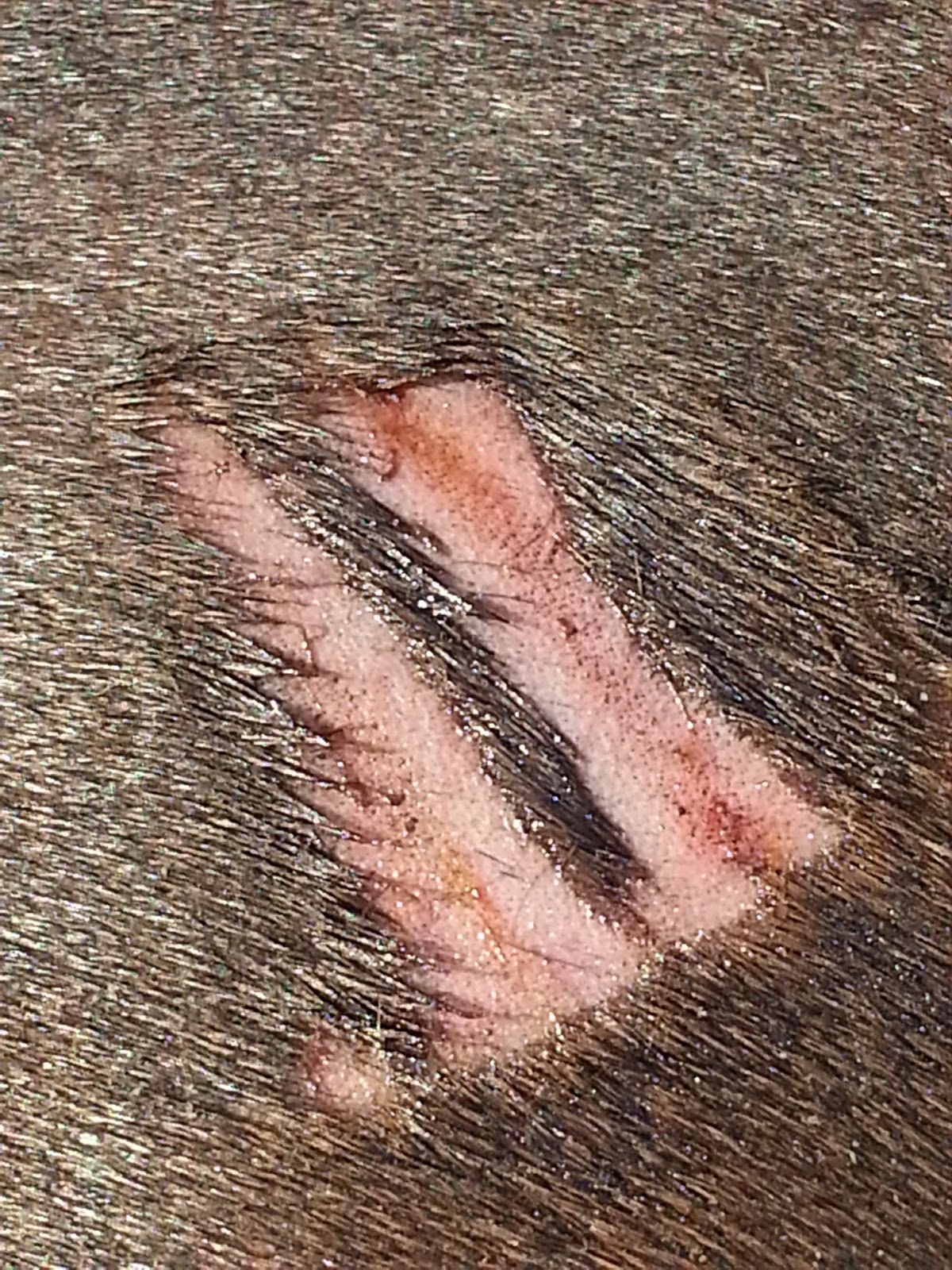 Posted by Training Cupid at 1:54 PM No comments:

When Dee passed away in May 2013, I didn't think I could ever love another horse. I had Dee for 18 years, and we were a great team and the best of friends. We used to go on long trail rides, horse shows, and pony club meetings. Then as she got older we would just go on walks and I scratched the itchy spot on her belly. When she was gone, I thought I was done with horses for good. Indeed for the next several months I kept busy with work and school and trained for a 50k race, until one day I realized I missed riding. I started taking lessons twice a week and enjoyed riding several different horses and learning different things from each. There were days when I had either a very good ride, or a bad one, and I couldn't help but think how it would be if I rode Dee that day and I cried with how much I missed her. I reminisced a lot, I'm sure some of the other people at the barn are sick of hearing my stories about Dee. Then one day I just felt like I'm ready for a new horse of my own. Dee can never be replaced and I still miss her, but I was ready to make new memories and try to give another horse the best life I can.

I started looking at horses for sale online. I found a nice 9 year old gelding that sounded good, so I forwarded the ad to my trainer. She was excited and said let's go see him. I found a few other ads that sounded promising and she got a few leads as well. Our first visit was to a thoroughbred farm to look at a four year old gelding who was too slow to even make it to the racetrack. The owner said she had a few other horses available as well. The second horse she brought out was a little 3 year old gelding who actually had won a race as well as placed second and third a few times. The owner said he always tried hard but she didn't think he would be able to move up much, and he raced two weeks ago but she thought he should move on to a non-racing home. This little guy was more interested in standing next to us and giving nuzzles than running around the arena. We got him to run enough that my trainer could see he had nice movement so we asked if we could ride him. I groomed him in his stall and he was very behaved even when I touched his belly and picked up all four feet. He nuzzled me and just wanted to snuggle. The horse had never worn a regular english saddle but was not bothered when I placed it on his back. My trainer got on him first and walked, trotted, and cantered both directions. He got the correct canter lead on each side. Then it was my turn. I tried not to feel too nervous. Jockeys usually get boosted up while the horse is being led at a walk, so he was not used to standing next to a mounting block and my trainer held his head while I got on. We set off at a walk, and it felt smooth. He was not used to leg aids and just ignored my heels. At least it did not make him run or jump! We did a nice smooth trot, and I directed him in some big circles and serpentines and direction changes. This was all new and confusing to him but he was calm and cooperative. I liked him, though wasn't sure if I was ready for such a green horse. I thanked the owner and went off to see the next horse. Over the next few days I went and saw several horses. I liked most of them, and thought about what the next few months as well as long term possibilities would look like with each horse and thought about how difficult it would be to choose. But there was only one that I always smiled when I thought about him, and I realized I showed several people (non-horsey people who probably thought I was nuts) his picture saying I might buy this horse. So I realized I had already made my decision, I wanted the little three year old gelding!
I called his owner and told her I wanted to have a vet look at the horse and if everything looked okay I was ready to buy him! I asked my sister to come with me, in case it got too overwhelming. A horse is a huge commitment, and for a moment it was almost too much to handle and I wanted to run away. When I finally got him back to the boarding stable I finally took a deep breath and was happy. I decided to call my horse Cupid because he is a sweetheart and was born on Valentine's Day. This blog will serve as a memoir of my journey with Cupid, as he changes from racehorse to riding horse and hopefully one day a hunter-jumper show horse. 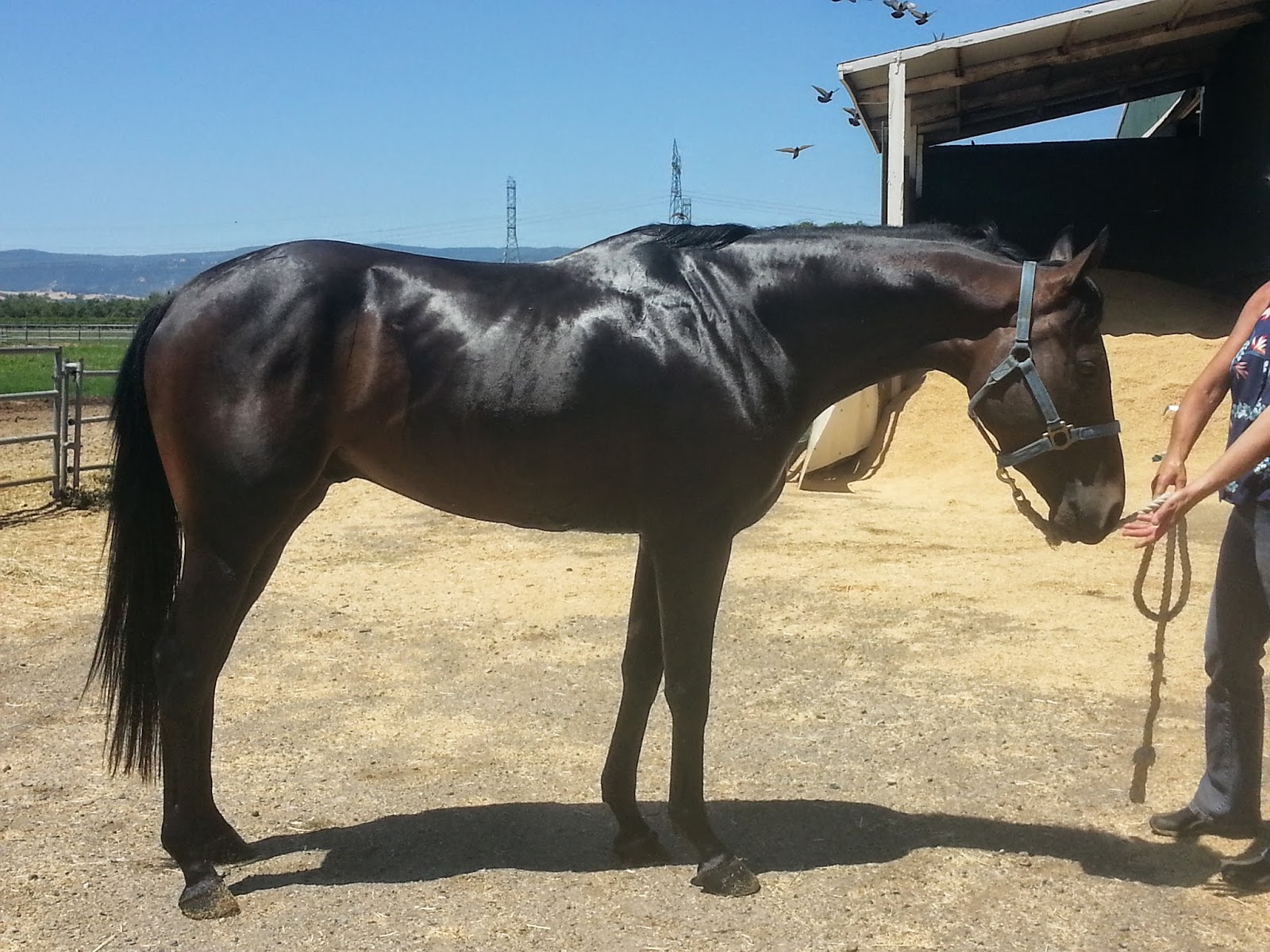 Posted by Training Cupid at 10:16 PM No comments: