Good thing Cupid and I have been improving responsiveness off the leg, because in our lesson today we worked towards medium gaits.

The exercise was to trot a 10 meter circle in the corner, sitting and with a bit of shoulder fore feel, then come out of it into a medium trot halfway down the long side, before collecting into another circle.  Then we did a few from the small circle into a short diagonal.

The good news is the small circles felt pretty good.  I think down the line collections are going to be easier then extensions for Cupid and me, he's just a compact little horse with a low set neck and his natural way of going is more daisy cutter.  But I have a bad habit of shoving my hands forward when I want Cupid to move out, which is so counterproductive!  I've been holding the girth loop on my saddle pad with my outside hand to help keep it in place.

We're not at true mediums yet, and I do lose the roundness sometimes but the last few felt like progress.

In the canter we just worked on lengthening and shortening on a 20 meter circle, then around the arena lengthening on the long sides.  The working canter feels super, but I wasn't feeling enough difference in the lengthenings.  Part of the problem is that my hips are a bit locked.

I was really happy at the end when we went to do some stretching trot to feel that not only was Cupid stretching his neck down (which at home he is always happy to do), but he was really pushing from behind and stepping under himself.  He felt both powerful and light at the same time!  So we must have been doing something right during the rest of the ride!
Posted by Training Cupid at 3:03 PM 3 comments:

We had a few rides that felt a bit sluggish.  It was taking a long time, like half an hour, before we were getting somewhat round, and even then Cupid was a bit behind the leg.  So I reminded myself to set my intentions and ride correctly from the start (yes we need to warm up, but that doesn't mean drift around on a long rein) and work on lots of transitions to sharpen up.  There was an immediate improvement :)  I just need to stay on top of it and make sure neither of us are getting lazy.

Our good weather had been continuing so yesterday Cupid and I went on a lovely trail ride at Huddart Park.  We saw more hikers then usual, everyone was taking advantage of the spring-like conditions.  Horses are not uncommon at this park and people tend to be very respectful passing, and generally seem happy to see us.  I always say hello, and thank you if people stand aside on the narrow trials to maintain this good relationship so we can all enjoy the nature. 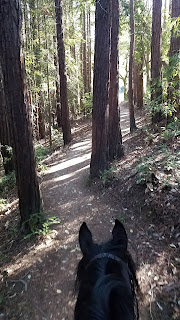 My friend's mare was in heat and trying desperately to get Cupid's attention, but he could care less.  Midway through we switched so Cupid was in front.  He is still a teeny bit more hesitant in front, but it's gotten almost imperceptible.  For the most part I did just let him walk on a loose rein, we can still take a break and relax once in a while as long as he responds when I ask :)
There is only a little bit of water in the creeks, and it's not really flowing.  Here's a video of one of several little bridges we crossed.

After we got back several boarders asked where we had gone and how it went.  One said that it must be nice to have a horse you can just go out and do fun stuff with.  I couldn't agree more!  I'm very lucky to have my lovely reliable horse, own truck and trailer so we can go wherever we want whenever we want, and to live in such a wonderful area where there are beautiful places to ride and lovely weather to do it almost year round.


Posted by Training Cupid at 11:14 AM No comments:

Happy birthday Cupid!!  It doesn't feel that long that I brought a sweet, tiny, green three year old home!  At the time I had no idea what laid ahead, and though we may not have had all the show ring success I may have hoped for, I couldn't be happier with the bond we have forged.  I'm also proud of the progress we made, slow as it may be, and happy and optimistic about the future.
I wish I was more eloquent so I could put into words what Cupid means to me.  How I can forget everything that's been stressing me when I'm with him, how he motivates me to keep trying and be better.  To whatever extent horses feel love, I hope he knows how much I love him.
Posted by Training Cupid at 10:50 AM 2 comments:

The past week or so has been steady and unremarkable.  I've continued doing no-stirrup work, even volunteering it in our last lesson.  It has really helped me better feel what is happening under me and also if I'm leaning.  Some things are easier, others a bit more challenging like not letting my hands fly up during our trot to canter transitions.
Since the weather has been nice, our outdoor arena is open again after about 2 months of non-use.  Our first ride in it was good, but the second time we went in there Cupid was very spooky and distracted.  We've ridden in it once more since, and he was still a bit spooky but not quite as bad.  Since this morning I didn't have much time to ride, I just did a bit of groundwork with him out there, hopefully that will help him be more relaxed next time.

Cupid and I also enjoyed a little jumping session while the jumps were set low.  We tested out the new filler and a little 2 stride combination.

Last weekend we went on a trail ride, with our usual companions as well as 2 pairs from our barn.  Cupid was a little anxious at first because the 2 new horses were walking faster then him, and instead of walking faster himself he just wanted to jig.  So we stayed behind my friend I usually ride with until he settled back down, and ended up having a very lovely ride enjoying our unseasonably nice weather.

Unfortunately Cupid got what I think was a kick in the chest, but luckily it was not serious.  We took it easy just walking a few days in case he was sore, but it is healing up nicely.

Posted by Training Cupid at 3:46 PM No comments:

One thing that really stood out to me in the video from the show was my floppy feet.  My trainer had been telling me that our past few lessons, but I didn't realize how bad it was until I saw the video!  And then Emma's comment got my thinking about the root cause, which I think is that I brace against the stirrups.

To back it up, I am somewhat a self-taught rider.  I started out taking lessons, once a week at a H/J lesson barn with my sister, but after not quite a year my parents decided it would cheaper to just buy us a horse.  So we ended up with a very green 3 year old!  After about 2 months we convinced them to lease a second horse so we can ride together, so that's how I ended up with my eventual first horse, a ranch-broke quarter horse that was pretty amenable to whatever style riding I felt like doing on any given day.  I think I only rode her bareback for several months because I didn't have a saddle!  Eventually after a few years I was starting to earn some money and decided to do a few lessons, and I remember back then the trainer telling me that I was bracing in the stirrup, but I don't think I rode with her long enough to really fix anything.  So I've had that habit for over 20 years and it is not easy to change!

But I decided I can't brace against the stirrups if I don't have stirrups.  I've never really ridden Cupid without stirrups, except at a walk while we're warming up.  I've been putting it off because I'm not convinced I won't totally bounce off his back!  We started on a 20 meter circle, trotting about a full circle before transitioning down to a walk for a few steps, then back up to the trot, a few minutes each direction.  Keep it short so I can hopefully do it correctly!  I have to be careful not to round my shoulders, or "clench." 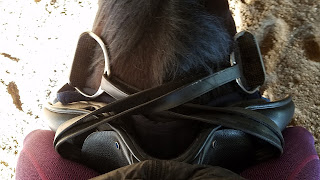 The next ride we did it longer, making each trot set a little longer and also cantered!  And it went better than I expected.  It was mainly just the transitions into and out of canter that I was worried about, but I had already been working on doing it from my seat.  Of course once you're in the canter itself it's a bit easier than trotting!  But without stirrups I can really feel when Cupid gets rounder since it makes sitting easier, and we definitely had a few moments of this.

Before all this, I had promised Cupid that if he was good at the show that we would jump in our next lesson.  He held up his end of the bargain, so I did too and we had our first jump lesson since maybe last spring (aside from the Nick K clinic.)  We build up to a little course of 5 jumps, 2'3"-2'6" and Cupid was super!  Since Cupid was relaxed I was able to focus on smoothing things out - straight approach and departure, maintaining the canter I want, and trying to land on the appropriate lead - instead of just being totally preoccupied with the jump itself!  It was a lot of fun.