My trainer and I often talk about how I sometimes still ride Cupid like a green horse, since it doesn't seem like that long ago that he was a three year old only trained for racing.  Sometimes I don't even realize what he is capable of now!  Plus to be honest, a lot of it (like turning with my inside rein or using a leading rein) is just bad habits.  But it seems like Cupid is starting to expect more from me!  We have been working on getting him to jump from the base of a jump (by using ground poles in front of the jump, as well as me sitting in the saddle to the base), and I've also been working hard on improving my position (not collapsing on his neck or jumping ahead), as well as supporting him with my leg coming to a jump.  So when I messed up the approach coming to an oxer with the barrels underneath, he was not very happy with me!  He landed and started tossing his head and getting quick.  I almost thought he was going to buck for a second!  But I sat up and he came to a stop.  My trainer told me I totally just let me reins go slack and collapsed on his neck, and that confused Cupid since it's not what we've been doing.

I was a little nervous after that, so we went back to the cross rail that was our warm up fence.  We trotted it a few times, then cantered it a few times.  My trainer told me to lean back, repeating it several times as I approached the jump.  Even though it felt like I was leaning way back, I think I was actually just in the correct spot.  I felt very balanced, and could actually let Cupid lift me out of the saddle as he jumped.

Then we went back and did the entire course we had been working on, which was the cross rail and six strides down to a vertical, then go around the end of the arena and jump the brush box on the diagonal, then go around the opposite end in a figure  down the other diagonal to the barrel oxer.  We did the course twice through, and it felt really good!  Cupid is very responsive, he just needs me to ride correctly!

Earlier in the lesson we did some canter work, and tried to see if I could get him to do a flying lead change.  We did not get it.  My trainer may ride him and work with him on it, I think he will figure it out pretty quick with someone more experienced guiding him.

After a nice dry period the paddocks have almost gotten dry, but it is raining again today. :/


Posted by Training Cupid at 11:25 AM No comments:

Winter is upon us, full force.  It has been really cold in the mornings, I can't even feel my toes when I ride!  It's not just my imagination, it was literally freezing cold (32 degrees). 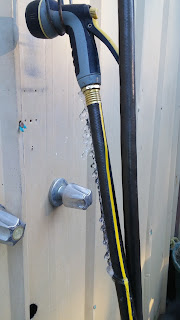 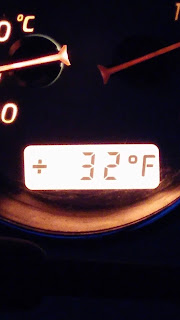 On Saturday morning Cupid and I shared the arena with two dressage horses.  They were practicing some pretty advanced movements and I had a hard time avoiding them because I was never sure which direction they would be going.  We had one close call but luckily avoided a collision.

Cupid started out a little slow, I think due to the cold.  I let him walk for a while to warm up, then we moved to a trot and worked on some circles and serpentines.  I asked for a canter on the left and he just trotted faster.  I tried again with the same result, so I realized I needed to get him in front of my leg and we did some shortening and lengthening at the trot.  Then we picked up the canter on his easier side (right lead).  He was still a little slow, I think he flattened to a four beat gait at one point so on the long sides I got up in two point and asked him to move out a little.  Then we cut across the short side of the ring, and when I asked him to come to a trot in the middle he correctly anticipated a simple lead change and that we were turning left.  This has tended to work - he got the left lead.  We went around a few times to the left.

We took a little walk break, and Cupid hung his head like he was exhausted.  Such a drama queen sometimes!  We did a little more trotting, then we picked up the left lead canter on a circle.  We cantered over a ground pole a few times, and I focused on sitting back and trying to get him to the base of the pole.

On Sunday I put out several poles on the ground.  We did a little trot course over them.  Then I cantered them but just one lead at a time.  With the cold his transitions were a little sticky.  But he was very relaxed cantering over the poles and not trying to jump them or taking off the long spots.  After about half an hour in the ring we went on a little ride around the property.  There was frost on the grass, and I could hear ice cracking as we walked across a little puddle.  Cupid startled a bit at a tarp that blew in the wind but kept walking.  Despite the cold we had a good weekend and I'm happy I was able to get two rides in. 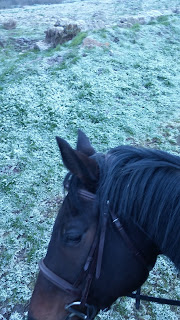 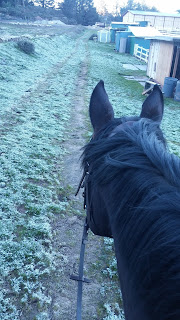 Posted by Training Cupid at 10:48 AM No comments:

Cupid has a half brother one year younger than him, named Global Magician.  He is a chestnut gelding by Globalize, and was born on the same farm as Cupid.  I never met him, but I follow his racing career.  Global Magician has had a lot more success racing than Cupid, and has placed in a few stakes races!  His record is 20-3-6-5, and he has earned just under $170,000!  Currently he is in Florida, and the race he won was a claiming race, 5 furlongs on the turf course. 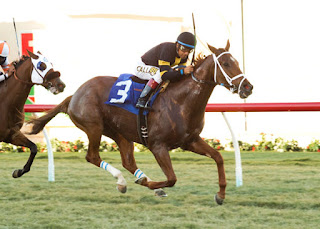 Posted by Training Cupid at 4:48 PM No comments:

Cupid was due for his annual dental appointment.  I couldn't coordinate with the one we used last year, or the year before, so I ended up going back to a vet practice I used for my old horse years ago.  The vet and her assistant were both super nice, and very sweet with Cupid patting him and trying to keep him as comfortable as possible during the procedure.  The vet noted his arrhythmia after sedation, though I think he has it always (or at least it's been noted before).

The vet said his mouth looked good overall; he was developing some points in his teeth but nothing sharp yet and no abrasions on his cheeks.  She showed me how the wear was a little uneven, and how he is starting to wear the enamel on his front tooth probably from scraping it on the bars.  She said the hay net was a good idea (I just ordered more, that are a heavier nylon web, hopefully those will last longer!) but next time we can discuss other options if it looks worse.  She also showed me how I can scrape plaque off his teeth!  She said I didn't need to do it, but can if I want to and Cupid is good about it.
The vet pointed out that Cupid has a little overbite, which I recall the vet saying during our pre purchase exam too.  But it's pretty mild and not really cause for concern.  She said he will probably need to get done again in about a year, and after that can perhaps go a year and a half between visits.

Posted by Training Cupid at 2:02 PM No comments:

I had one of those great lessons where I really enjoyed jumping and thought that maybe I could show over fences someday after all.
We started with some flat work to warm up.  We worked on bending, circles, and shortening and lengthening the trot.  Then we did a little canter, starting on the left lead on a circle and Cupid got the correct lead.  After a few laps, sitting on the short sides and in two point with a little inside bend and lengthening on the long sides, we cut across the middle of the arena and did a simple change.  Cupid seems to have figured this exercise out, as soon as I asked him to trot in the middle he anticipated the direction and lead change so I barely had to ask!

Then we started with a little cross rail, with a pole on the ground one trot stride out.  We trotted in and the pole helped us get a good distance, and allowed me to focus more on my position - supporting Cupid with my leg and not getting ahead.  Then we added another pole another step in front, and then a third plus a rail on the landing side.  The landing rail threw Cupid off the first time, but he quickly figured out how to navigate it.  We went around in circles, first on the left rein then the right.  He was being perfect, relaxed in the approach and landing softly and coming back down to a trot.
After doing the cross rail several times each direction we went to two jumps (a crossrail and vertical) that my trainer said were 3 long strides apart, that we should trot into and do in 4.  Cupid was perfect!  After going through it twice my trainer put the crossrail up a little, making it a deeper X which she said would help Cupid with his form.  Since Cupid was behaving so well I was able to relax myself and actually have fun.  I was very happy with Cupid, and also proud of myself because I was able to land and get myself organized a lot better then I usually do.  I still got a little too forward and up Cupid's neck in some of my approaches but overall I think I did pretty good! 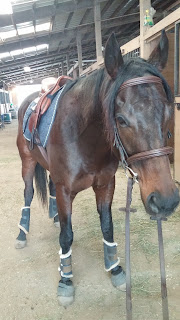 Posted by Training Cupid at 4:47 PM No comments:

Cupid has a special talent for losing shoes in the winter.  After the most recent incident I decided to try clips on him.  I was a little hesitant because I thought he would still lose a shoe, and take a chunk of his foot with it, but we lost so much riding and training time last winter I decided to give it a try.  It's been raining and so far so good! 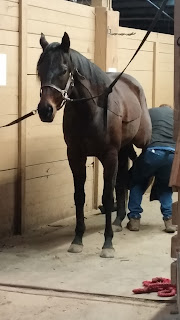 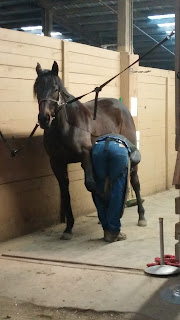 Another recent experiment we tried that was not a big success is feeding him with a hay net.  I thought it would be good if he ate more slowly so he doesn't get bored in his stall, but he has destroyed two nylon hay nets within two weeks!

Posted by Training Cupid at 1:18 PM No comments: