Cupid's training and our lessons are going smoothly.  His flexibility is increasing, though he still braces against rein pressure a little bit and still has a harder time traveling left.  But he is moving out in a nice swinging walk and uses his hind end well at the trot.  We are also working on a slow trot (not collected yet), but my sitting trot needs some work.  Canter leads are a work in progress.  He gets the right a little more consistently, but can something get them wrong both directions.  His attitude is great during our training sessions, even though sometimes he is a little confused.  He is very focused even when there are lots of other horses cantering and jumping around him.

We've had our two lessons this week, so today hopefully I can take him for a little trail ride around the property.  It is getting dark very early, and this weekend it will get even worst with daylight savings time.  Plus it is supposed to rain tomorrow.  I hate winter!
Posted by Training Cupid at 9:22 AM No comments:

Cupid is progressing well, but still needs to work on yielding to pressure.  He bends his neck around if we are at a halt, but somehow it doesn't translate when we are moving.  So I'm still working on it with a leading rein, riding all sorts of circles and serpentines and crazy patterns.  We are doing a little leg yielding, and it is okay going towards the right but not as good to the left.  I've been riding with very light contact, but now the trainer wants to see me ask for more.  He doesn't do anything bad, but kind of resists it and braces his neck.  So I am slowly introducing side reins.  I tried them out very loose today. 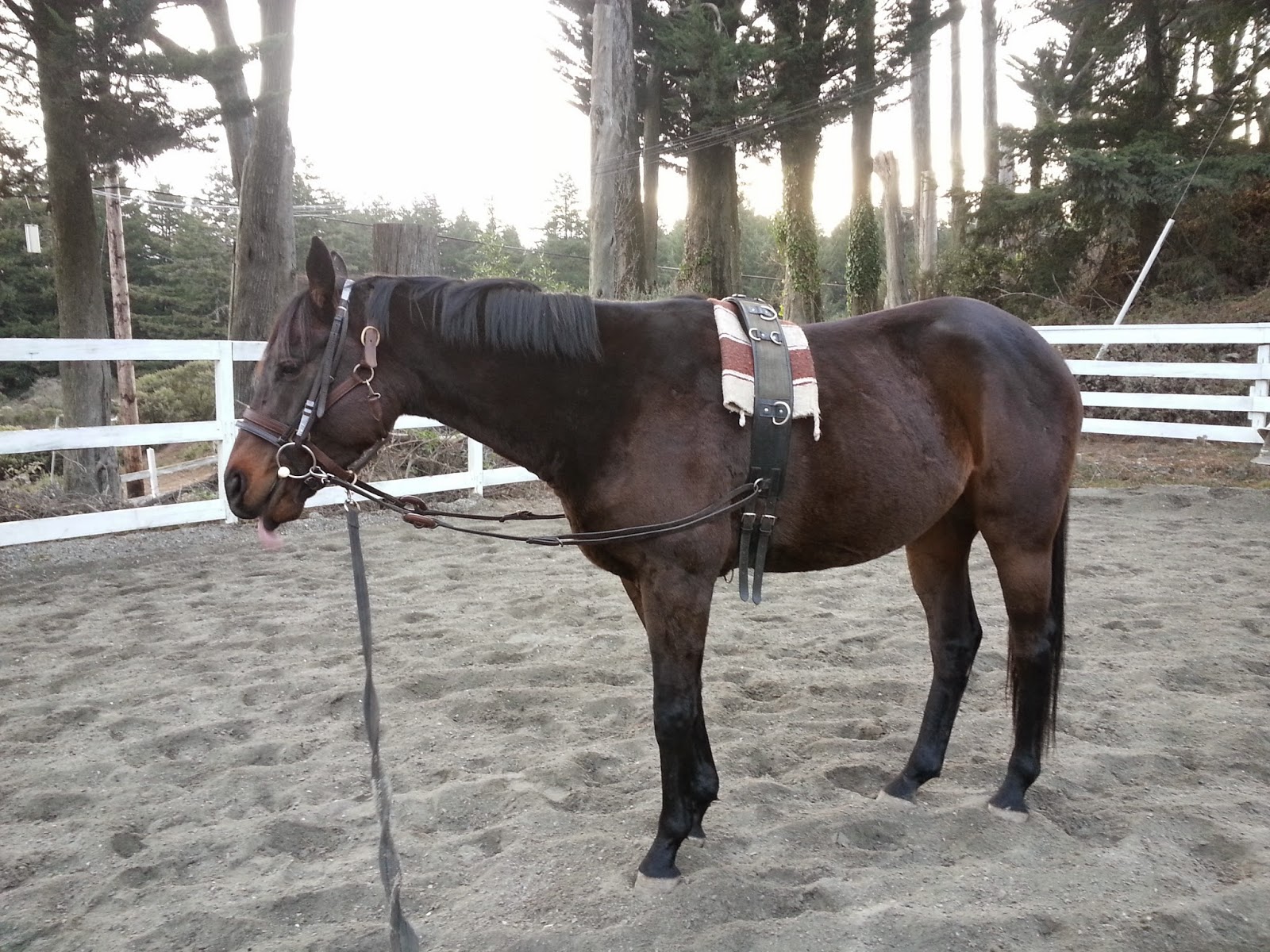 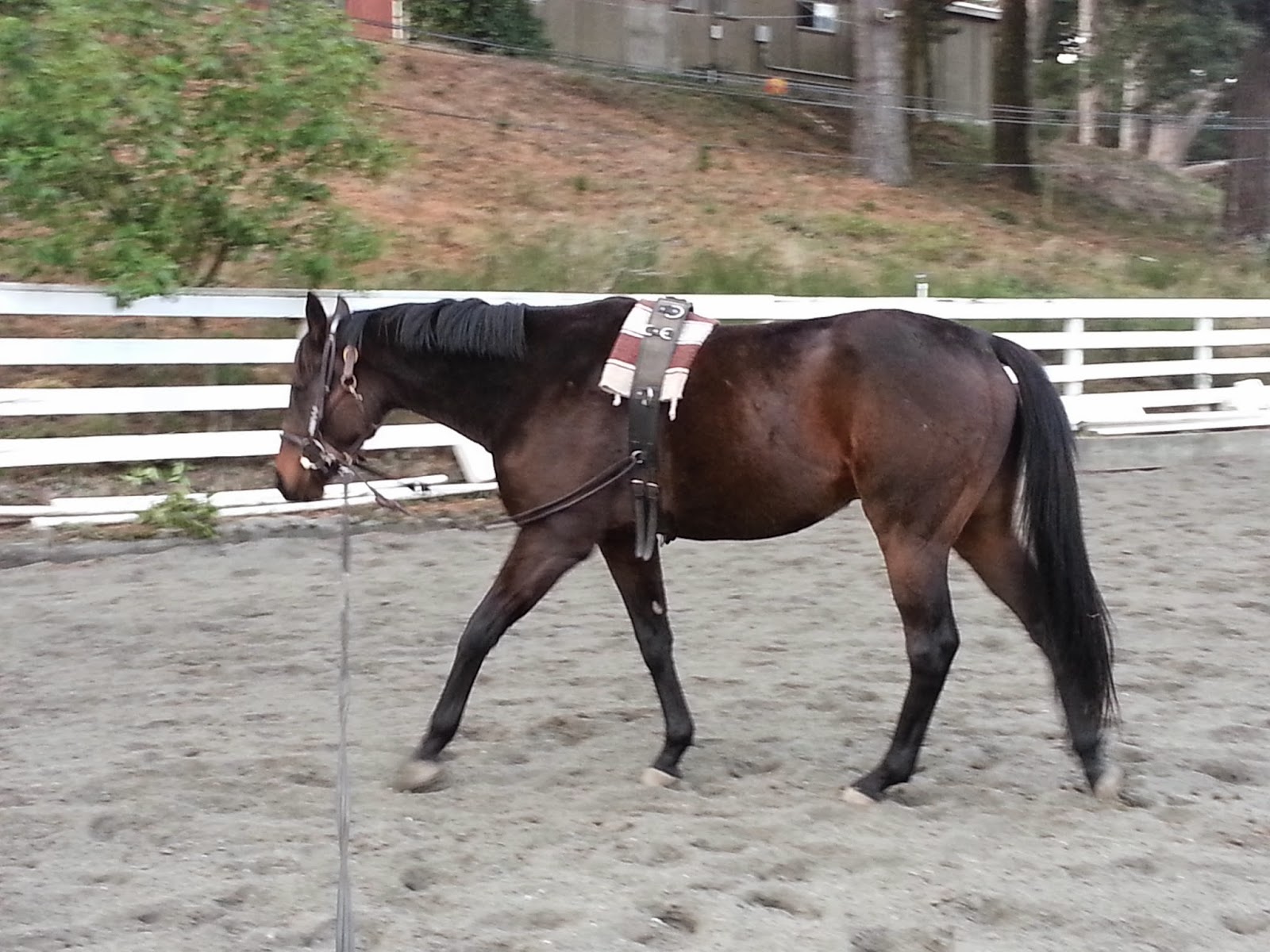 Posted by Training Cupid at 11:34 AM No comments:

Cupid has been doing well. He still has a harder time bending to the left, but we are working on it and also learning a little leg yielding. This weekend I decided we needed a little break from the arena so we did a little desensitization training. Cupid is not really bothered by anything. He walked straight through plastic bottles strewn on the ground, walked over a garbage bag, and through the pool noodles. He doesn't like it if I walk through the noodles and they snap back towards him, he flinches a little but that's all. He didn't mind me waving a noodle around him or touching him with it. 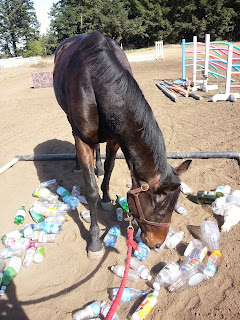 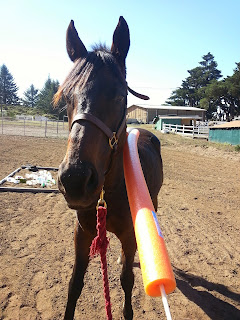 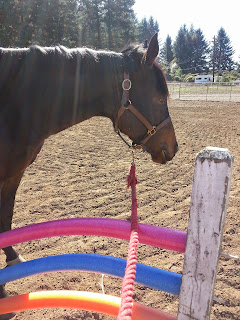 Last week Cupid was having a little problem being away from his pasture buddy, Bruno. One day when Bruno was taken out he got a little panicky and started running around frantically calling. I wasn't there, I've never seen him do this. Another boarder told me she thought Cupid was down at the water and didn't see Bruno leave so maybe that's why. One of the other horses that used to live in the pasture moved recently, so maybe he thought Bruno was gone for good too. Then a few times when I was riding him he called out to his friends. Luckily he doesn't get too distracted or acts up, just a little whinnying. The last few days he didn't have this problem. But Bruno and Cupid are best friends, and even eat out of the same bucket. 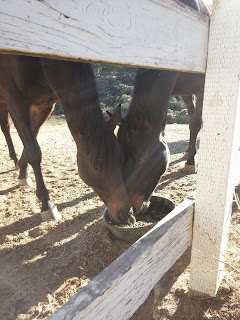 On Sunday I cantered on Cupid for the first time since his injury. He still does not understand leads, so we'll keep working on that but it felt really good. He has a very nice canter, smooth but covers a lot of ground. After he canters he gets a little pep in his step and likes to trot pretty fast, but settles down pretty quick.
Posted by Training Cupid at 9:24 AM No comments:

Cupid has been doing very well so his work load is gradually increasing. We are now having two lessons per week with our trainer. We have been focusing on getting him to bend and yield, as well as making sure he is moving forward and stepping underneath himself. He is still a little confused about what I'm asking him, but he is trying hard to figure it out. He is very mellow and doesn't mind if there are lots of other horses cantering and going over jumps around him. The weather has been quite warm, but the days are getting shorter. I wasn't sure how much coat Cupid grow his first winter out, but he became very fuzzy practically overnight. Pictures to follow!
Posted by Training Cupid at 11:46 PM No comments:

Cupid has his follow-up visit with the chiropractor, and she was very happy with his progress.  She watched him trot on the longe line, then told me to ask him to canter.  I've actually never cantered him on the longe before, but he stayed on his circle and had a very nice smooth canter going.  A little unbalanced, and didn't get the correct leads right away but I was very happy.  Cupid has a sore spot on his neck, lower back, and a little in his left hind but noticeable improvement from last time.  Our instructions are to step up the conditioning a little, doing more caveletti and a little cantering on non-consecutive days. 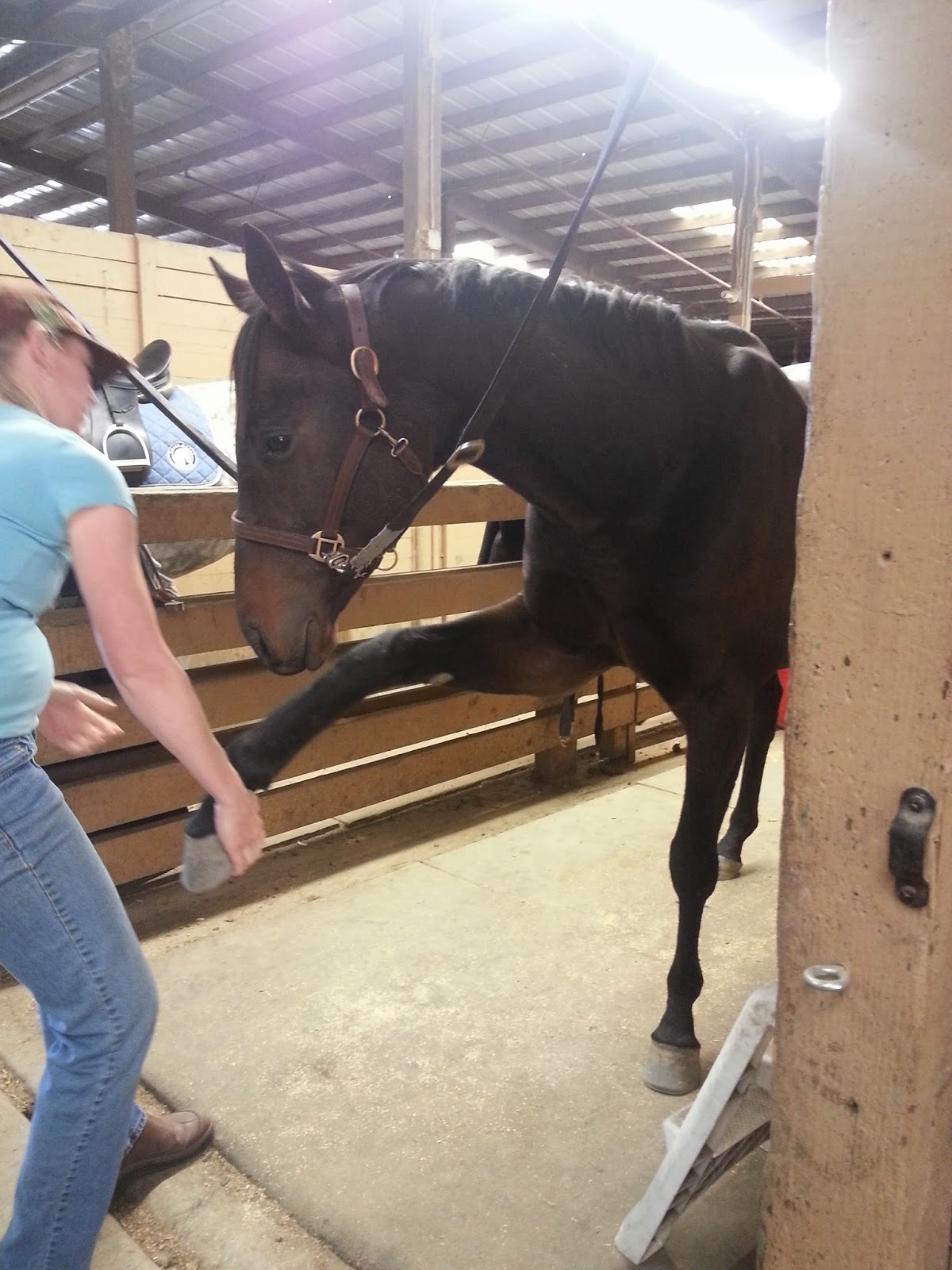 Posted by Training Cupid at 12:45 PM No comments:

Last weekend I was grooming at a horse show and didn't get out to see Cupid until the evenings.  On Saturday I noticed his nose felt a little rough, but he had just eaten his grain so I thought he was just messy.  By Sunday evening his entire muzzle was covered in rough bumps.  I thought he had an allergic reaction so I gave him benedryl, but it seems like it might be warts or some sort of rash.  I haven't seen any nettle or poison oak in the pasture but maybe there is some.  Poor Cupid!  At least it does not seem to be itchy or uncomfortable. 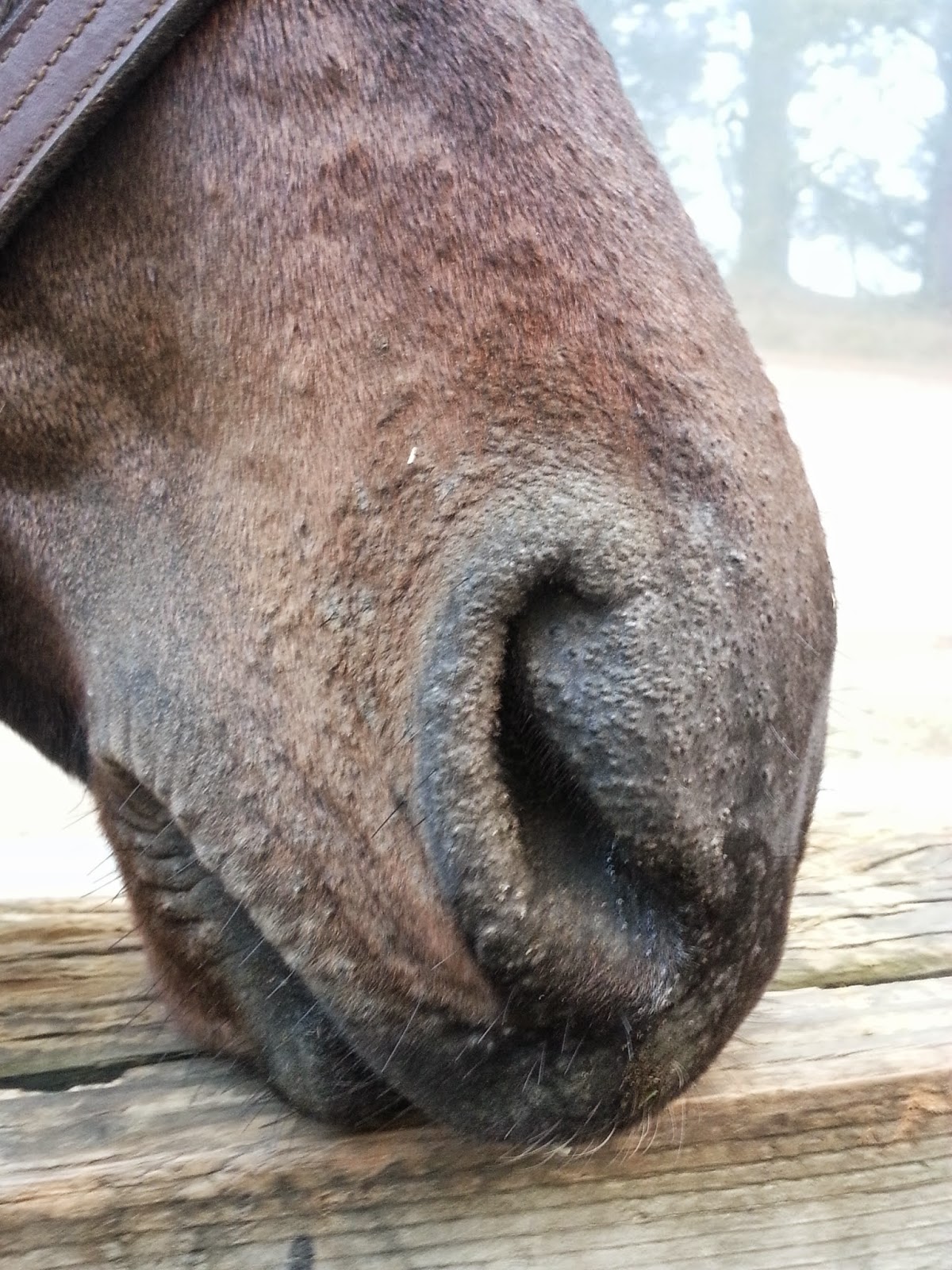 Between the horse show, the rash, and some work events Cupid has had a slightly reduced work schedule the last week.  I try to ride him outside when I can because the slopes are good for him and to prevent boredom, but it's getting harder to do since the days are getting shorter.  Cupid will on occasion call out to his friends, but so far he has been fantastic.  He walks by tarp piles, rustling bushes, and wildlife without any hesitation.  I thought the biggest challenge would be keeping him from trying to eat everything because he can get a little pushy with that when I'm leading him, but he seems to know he's not supposed to graze when I'm riding him. 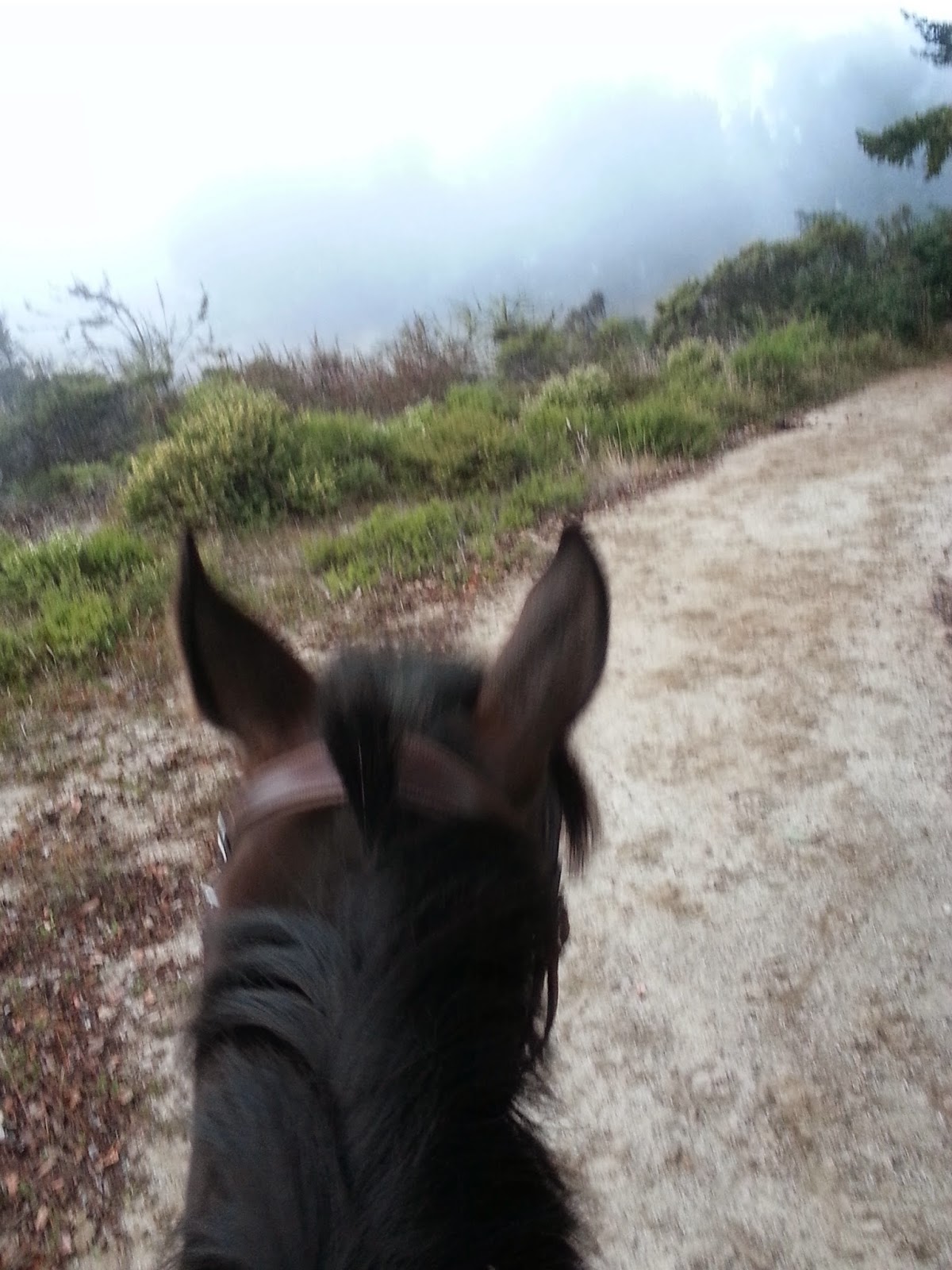 Posted by Training Cupid at 4:04 PM No comments: