Yesterday one of my trainer's working students rode Cupid after my lesson.  Other than my sister no one else has rode him in quite a while.  It took them a few minutes to get used to each other, Cupid was fussing with his head at first but then settled down.  It was fun watching him go, though also a bit nerve-wracking for me!  (I'm a little protective...)  The girl is a pony clubber, and a lot more confident than me!  After a little flat work she asked if she could do some jumps.  I told her if she was comfortable go ahead.  They did very well, just one run out on a three stride combo.  Cupid tried ducking out with me on that same line but I was able to get him back on track instead of just let him take control.  Then we put the jumps up a little, I think they finished at around 2'6".

My lesson prior went very well.  Cupid has been very responsive, and I'm becoming more focused and organized.  Apparently I have a bad tendency to stand up over jumps instead of folding forward, so I'm trying to work on that.  We started by jumping the little three stride combo, first as a pole to a jump then raised the pole to a small crossrail.  Then we added a little brush box after that, in kind of a figure 8 pattern.  Then we added the barrel jump, which was next to the brush box so jumped, landed and circled around to the barrels.  I didn't hesitate so neither did Cupid. :)  I was very happy with our lesson.

On my non-lesson days I spent one day in my dressage saddle working primarily on our transitions.  The halts still need work, I think I'll have my trainer help me with that at our next session.  I also went on a nice little trail ride.  We took it easy and mainly just walked and enjoyed the view.

Posted by Training Cupid at 1:33 PM No comments:

The heatwave finally broke today.  In fact it was cool and drizzly when I went out to the barn this morning.  I figured Cupid would probably be feeling a little spry with the change in temperature, and was a little surprised to find that if anything he was lazier than usual!  Thankfully we were all alone.  What I call Cupid's "comfortable trot" my trainer usually refers to as "revolting!"  We trotted over a pole and cantered a bit.  Usually jumping wakes Cupid up, so I point him towards a little X.  He comes to a crawl a few steps out, and makes the smallest possible effort to barely clear it!  So I decided both of us need to put a little bit more effort into this ride and encouraged him on.  The rest of the ride was not bad.  We jumped a few Xs, a little vertical, the brush box, and even the dreaded barrels.  I decided not to attempt the 4 jump combo set up on the diagonal.


Posted by Training Cupid at 3:31 PM No comments:

Cupid and I have been working hard towards our first show, which was supposed to be next weekend.  Unfortunately it looks like we will have to wait a little longer to make our debut.  :(  It sounds like no one else from my boarding stable is planning on going, and it is just too cost-prohibitive to charter a trailer just for one horse.  Although I was pretty nervous I was also excited to see how we would do and how Cupid reacts in that environment.  It is a little disappointing that we can't go, but he is still young and we there will be plenty of other opportunities in the future.

We have been working a lot on our down transitions and halts.  Trot to walk tends to be pretty abrupt, and Cupid gets fidgety at the halt.  I noticed he tends to swing his hindquarters to the right after he halts, I don't know if I'm sitting or holding the reins uneven and making him do it or if it's just his own tendency.  For me I've been working on just getting more comfortable/relaxed jumping.  I still jump ahead a little and let me legs swing back but it's a bit better when I'm specifically thinking about it.

Our trainer would like us to work on our fitness - doing sets of 3 minutes trot and 2 minutes canter (about twice around the large covered arena).  The canter work is fun!  Cupid and I are both getting used to me riding in the saddle instead of two point.  I'm working on using my core and starting to play a little with increasing and decreasing Cupid's stride. 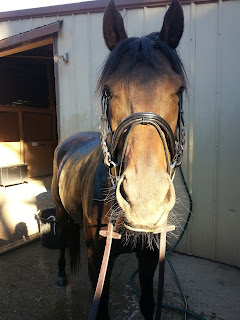 Posted by Training Cupid at 10:43 AM No comments:

Cupid and I completed our "boot camp" - six consecutive days of lessons!  I was worried he would get cranky or sore by the end, but he was a good boy throughout.
With the jumping he's good as long as I'm good.  Some days I let my anxiety get the better of me, and we had a run out when I got scared of a jump over barrels.  We ended up taking the middle barrel out and just trotting through it a few times as I didn't feel confident enough to try again, and jumped some crossrails.  But the next day we did the barrels - the trainer put up "bumper lanes" (aka wings) which helped me feel more confident.  Cupid doesn't need them but sometimes I do!  We did a nice little course, trotting most but cantering a few of the jumps.  Cupid still jumps a little green and I'm never sure if he's going to add a stride or take off early, or jump huge but mostly I just try to stay out of his way.
We also worked on our dressage tests.  I have them memorized, but will probably have someone call it at the show because I may forget with the nerves!  The biggest things we have to work on are the trot-walk transition, which is still too abrupt, and me relaxing and sitting up when Cupid gets quick instead of leaning more forward like I tend to do.  I also am still getting used to the longer stirrups, it feels weird and like I can't even post up.
We've had a little heat wave.  Luckily my lessons are in the morning, but even by 8 it has been 80 degrees!  Due to the drought I've only been sponging Cupid off after I ride, but on Saturday I finally couldn't take it anymore, he was totally filthy so I gave him a good rinse with the hose.  He looks so much better now plus I can get him ready quicker.

Posted by Training Cupid at 2:21 PM No comments:

Cupid and I have some extra sessions with our trainer this week because we're going to our first show in a few weeks!!  Since this is Cupid's first show, and my first show in about 15 years, I want to take it a bit easy and see how he reacts being in that atmosphere.  Hopefully he will not be too anxious.  If he seems okay we will do some Intro dressage tests, and possible a crossrail jumping class.  I'm starting to get nervous just thinking about it, but hopefully I can stay relaxed enough to help Cupid relax too.
Our past few sessions have been excellent.  Cupid has been trotting quietly into jumps, and landing quietly and listening to me.  We jumped almost all the jumps set up in the arena, twisting around in a little course.  Mostly they were cross rails, but also a slightly narrow vertical, a little brush box, and a jump with barrels lying under it.  There was a triple combination: cross rail oxer, one length to another crossrail, and two lengths to the brush box, but instead of jumping it as a line we jumped each element individually on an angle, and also jumped the first and last one going around the middle one.  That exercise was hard, I missed the second jump the first two times because I didn't plan ahead and react fast enough on landing and didn't want to jerk Cupid around to make it.  Planning ahead is something I need to work on for my courses.
I have dressage Intro B pretty well memorized; it's a simple test just walk trot, with 20 meter circles at trot on each rein and one change of direction at a walk.  I need to work on my halting at X, I usually start asking too early.  Also our downward transitions can be a little abrupt.
This weekend my sister rode Cupid.  It was fun watching him go, since usually I only get the view from his back.  He was being a little lazy but was a good boy.

Posted by Training Cupid at 11:07 AM No comments: