On Sunday Cupid and I went to a working equitation clinic.  Actually it was a bit more of a playday/free practice session, not structured but there was a trainer there offering help.  There was a course laid out, most people worked on the obstacles individually and then went through the entire course once or twice.  (If you stayed to the end, there was an opportunity to run through the entire course without other horses in the arena and with the trainer helping you through, but I left before this.)

My main goal going into it was to practice the gate, which we still have not really been able to do as usually Cupid backs up when I start opening it.  So the trainer offered to help me, and helped me break it down.  So first I was just to stop Cupid alongside the gate, let him halt a few moments, and walk off.  Then we halted by the gate, backed a step and halted, took a step forward, and halted.  Then I unlatched it and back a step, halted, stepped back forward and latched it shut, and walked off.  Then she partially opened the gate and held it there, and had me stop Cupid in the new position.  Then she opened the gate further and had me stop from the other side.  And finally stand by it shut from the other side.  She suggested I try this a few more times, breaking it down into steps and preferably with someone on the ground to help and make Cupid very comfortable with each position.

This was really helpful - though I must say I was a bit sad that there wasn't a quick fix and we are now opening and closing gates no problem lol.

Cupid was very good with the other obstacles.  The only thing really new for us was a feed sack, stuffed and tied, sitting on a barrel that we needed to pick up and carry around one of the other obstacles then back to the barrel.  Cupid seemed to recognize the sack as what his food comes in and had no hesitation approaching it.  He was a little concerned about it bouncing on his shoulder as I carried it, but got used to it.  And I have to say, we've been practicing a bit of neck reining at home and I was very happy with how he good he was with me reining one handed with the sack in my other hand!  For novice level apparently you need to pick the sack up from a trot!  But if I show it will be at intro, where you are allowed to walk or even stop to pick it up.

We also worked on our neck reining with the pole (garrocha).  In the competitions and practices I've done before we just had to pick up the pole, spear a ring, and put it in a second barrel on a straight line but this course actually had you carry the pole and ring through your next obstacles (ground poles to step over), turn 180 degrees back around and place the pole back into the barrel you got it from.  And Cupid was a rockstar at this!  (As intro level, we just did it at a walk.)  We also practiced putting the garrocha in the barrel and walking a full circle around holding it, again more neck reining.

The clinician told us it is not really about the obstacles themselves, the obstacles are just place holders.  You are judged on bend, square halts, smooth transitions, etc.  (unless you're me and you drop the gate, give up and get a 0!)

This course was also quite a bit more technical then ones I've done before, and really made you think about your route.  At intro it is a bit easier because you trot in between obstacles, but the clinician said for the highest points most judges want to see you riding the same as if you were in a higher division and had to canter - so think about which lead you need to be on and how you will approach each obstacle straight.  As well as making sure you don't cross an obstacles you haven't completed yet (for instance ride in between barrels or poles), as that is an automatic elimination.  It was interesting hearing the clinician and some of the more experienced riders share their thought process on how they plan their route.

I was really glad we did this clinic - it gave us new things to work on and was also just low stress and fun!  I'm not sure if we will be able to attend any WE shows this year, I wish they were closer, but it sounds like there will be one only an hour away this fall so maybe we will aim towards that.

Sometimes I hesitate to put up pictures or write about something some people may find controversial.  (Not that there are that many people reading this.)  But this is my journal, so I'm just going to go ahead and say that I got a Pessoa and have been lunging Cupid in it about once a week to help encourage him to use his hind end. 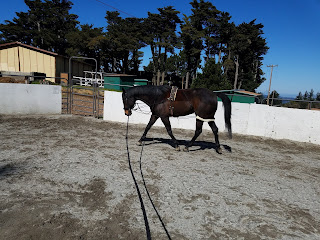 The first time I used it I let Cupid warm up in the walk and trot without it.  Then I put it on with my trainer there to help me adjust it correctly, and he was pretty accepting.  We trotted both directions, and it was easier to get him forward and stepping under himself compared to when I just use side reins.  He bucked when I asked him to canter, but was fine after that.

I am using the Pessoa the same way I am trying to ride him, with more push from behind into a steady contact.  Except unfortunately when I ride I don't think my contact is steady enough, which is why I thought the Pessoa will help Cupid figure out what we're trying to do.  I think he's looked pretty good with it and doesn't seem to mind.

I've heard the arguments against it, but I consider the Pessoa a training aid, and a useful tool if used in moderation and with knowledge.  Which is how I feel about most gear - some things I wouldn't use myself, but it could be useful for a given horse with the right rider/handler.  For instance I'm not opposed to draw reins under the right circumstances - but it is not something I would use myself because as I said my hands aren't steady enough and I wouldn't really be comfortable right now with 2 reins.  Even bits that may seem unorthodox I feel like for some horses and with a very quiet educated rider they are fine.  So I hope no one is judging me for trying the Pessoa!

Eons ago, last fall, my trainer lent me her NS Verbindend bit ("NS") to try on Cupid and she thought it was an improvement and I should get one.  At the time, I was a little uncertain because it felt like some of the ride was very good with Cupid feeling quite round (still a struggle, especially at that time) but he also came above the bit with more reaction then either the single joing snaffle or Herm Sprenger double joint I was primarily riding him in.  But I trust her judgment and bought one during black Friday.  Then unfortunately a few days later I got a message that it was back-ordered, delivery date uncertain.

I thought about canceling the order and trying a different retailer, but I didn't want to lose my black Friday promotion.  I scoured Facebook tack groups but unfortunately did not find any the right size.  But then I came across UK-based Expert Bits that makes something that looked quite similar.  I was a bit hesitant to buy something I wasn't familiar with that didn't have many reviews.  But the company seemed legitimate, and I like that it's a family owned company, and at 1/3 the price of the NS I figured it was worth a try.

I placed my order and received my bit a week later!  My first few rides in it felt pretty similar to the NS - the good parts were very good but there was still some resistance where Cupid threw his head up in protest, more reactive then our old bit.  But after a few rides I was quite happy with it.

Now after long last I finally received the NS and laid it by the dupe for comparison.  They really are quite similar.  One difference is the width - NS comes in 12mm or 16 (mine is 12), and the Expert bit is right in between at 14mm.  The center link is slightly smaller on the NS, and the holes in it smaller.  The NS is also a bit more sharply angled.  Both bits are a copper alloy but I don't know the composition - the NS is shinier and I think maybe a bit softer (I've only had one ride in it, but you can see some light teeth marks which wasn't the case with the other one.) 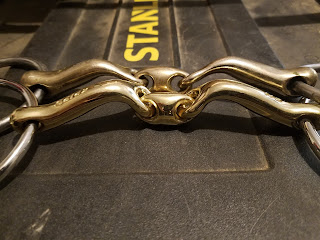 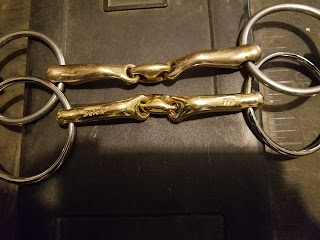 I've only had one ride in the NS, and it was good though I didn't really notice a difference from the Expert.  Our rides have been a bit inconsistent lately, so it just felt like any of our better recent rides.  Since I'll probably be using this bit for a while I don't regret buying the NS, but I think the Expert is a solid alternative.  Especially if you aren't able to test a NS before buying it and aren't sure it is right for your horse, or for young horses especially ones that chomp the bit, or just as a back-up to keep in your trailer, which is what I think I'll be doing with mine!