On Thanksgiving day Cupid and I took a walk down the road to the county park where we can trail ride.  I decided to put a chain on his nose just in case.  On the way there he started out pretty good, but once again he started getting nervous as we got further away from home.  I was hoping that if I led him instead of rode he would be calmer, since I wouldn't be nervous and passing that on to him, but I don't think it made much difference.  Even though there was lot of grass at the park he was too distracted to enjoy it.  He was on high alert and wanted to keep moving, but luckily wasn't dragging me or doing anything really naughty.  I waited until he felt a little relaxed then headed back.  He definitely wanted to get back home, but luckily for the most part still behaved.  It was tough in a few parts where the trail was very narrow I had to walk in front of him, he's not used to being led like that and since he was nervous I was worried he would run me over.  Luckily we made it back in one piece.

After we were back on the property he felt much more relaxed right away.  In case he still had some nervous energy I let him into the new round pen.  He did trot and throw a few bucks!  But mostly he enjoyed rolling in the sand.  He rolled about 6 times! 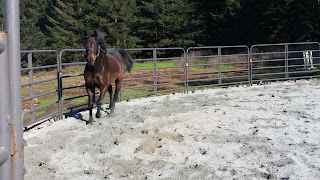 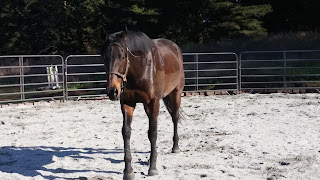 Posted by Training Cupid at 9:17 AM No comments:

It's hard to believe that Cupid is nearing the end of his five year old year, seems like just yesterday he was that super green three year old.  But last weekend he served as the old pro for my friend's first ride outside the arena on her three year old!  We spent about half an hour walking around the property, with the three year old following quietly behind Cupid.  We passed by some commotion with fence work being done, horses being ridden, bunnies running in front of us.  Cupid actually had one small spook getting startled coming around a corner, but it didn't bother the other horse.  We stepped over a little log too.  I think Cupid enjoyed having some company.

On Sunday it was raining, and we rode in a very crowded arena.  Cupid was very good, and we even cantered around quietly.  We have been pretty good about picking up the left lead, but he does seem to struggle a little towards the end of a ride if he's getting tired.  We may need to work a little on fitness.

My trainer rode Cupid last week.  I wasn't there to watch but she said he was very good and has made a lot of progress since she last rode him several weeks ago.  I have pretty much gotten to the point where I have taught Cupid everything I know, so I asked my trainer to start riding him periodically to help him progress more.  Especially with our dressage / flatwork in general, this is as high as I ever got with my last horse so we will have to learn together from here.
Posted by Training Cupid at 4:20 PM No comments:

I am really happy, and relieved, that Cupid was totally back to his normal self our last two rides! Prior to that he was still being reluctant the first time I would ask for a trot, and I would have to get after him a little, and then he'd be mostly okay afterwards.  But our last two rides he was perfectly responsive.

I was gone a few days last week for a work trip, and my trainer was set to ride Cupid in my absence.  I was looking forward to hopefully seeing some progress.  Unfortunately the day I was leaving I went out to find Cupid missing a shoe.  I called the shoer, but he was not able to fix it until the day I came back so she didn't ride.

Cupid got a trace clip, done by one of the other trainers at my barn.  He has been sweating from even pretty easy rides, so hopefully this will help him be more comfortable. 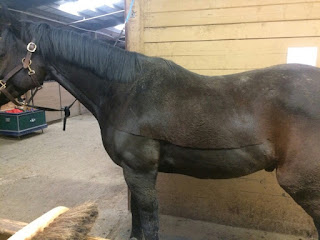 Cupid and I did a little trail ride.  This was our first good ride, Cupid was not hesitant to trot at all.  I thought it was just because he was happier being out of the arena.  He even cantered a few strides up a little incline.  I asked him to rough it a little, scrambling up a few steps between two trails that run parallel.  He hadn't been on the upper trail before, it dead ends in a little clearing where there is a shed/garage.  We walked past it, and Cupid was pretty surprised by a tarp covered pile on the other side.  I was surprised by his reaction, I wouldn't have expected him to be wary of it.  But he was staring at it, a bit curious but also nervous so he would slowly inch towards it, then freeze and back up.  I ignored it and made him do a few little circles and figure eights.  I didn't make him go all the way up to it, I just wanted him to focus on me.

Then we found an empty pasture to walk around in.  When it rains the water forms a stream across.  Right now it was mostly just a muddy, marshy line across the pasture.  We walked up towards it, and Cupid stopped in front of it.  He jumped over the first time, but walked through the next few times as we went back and forth across it.  I had fun doing something a little different, and will try to keep riding him out a little more though it will be hard in the winter.

The next day I had my lesson, and again Cupid was great.  We did some flat work including circles, bending and shoulder fore both sides, and making sure I balance with a half halt before the corners.  We did a little canter work, and Cupid got both leads correct.

Then we trotted through a few poles, and Cupid was more relaxed then the last time we did this.  We ended up doing a little cross rail a few times each direction.  Cupid was good, and relaxed throughout.  My trainer said we would do some longe line work, so I can focus on my position a little more.  I also talked to her about maybe riding Cupid semi-regularly, since he now pretty much knows everything I do I think I will need a little more help to continue with his progress!
Posted by Training Cupid at 3:37 PM No comments:

Although I felt like I was making progress with Cupid I still had some concerns that he was uncomfortable.  Plus he was due for vaccines anyhow, so we scheduled a vet appointment.

The vet measured Cupid at 15.3 hands, and just over 900 lbs. (the first time he's broken 900!)  His temperature was 99.9 degrees.  The vet watched him trot and checked him over from head to tail, and said that overall Cupid looks like a very healthy horse.  The only thing he could find was that he was a little reactive to the hoof testers in both his front feet, and recommended packing his feet a few days to see if that helps.  Also he is due for dental, but just for regular maintenance.  We discussed the behavioral issues, and the vet's conclusion was that Cupid was a little bored and just taking advantage of me!  He suggested I try helping the feet, and also seeing if Cupid is more willing to go outside the arena.  He didn't think a blood test would turn up anything, and said if things don't improve we can do a more thorough lameness workup and maybe xray the feet.

The following day I resolved to be more firm if necessary in our ride.  It started off well at the walk, but as soon as I started organizing myself to ask for a trot transition Cupid started balking and sure enough when I put my leg on he stopped dead.  I gave him a few taps with the whip behind my leg, and he swished his tail and pinned his ears and kicked out.  I squeezed again, he didn't move, so I gave a few taps with the whip and he kicked again.  I asked again, and he reluctantly trotted off.  Once he got going he was fine.  We did trot work for a little bit, then I let him walk.  The next time I asked for a trot it was much better!

The next day was Saturday, and I rode him outside the arena.  The ground was a little muddy but not too bad.  We went all around the property and found a few places where we could trot a little.  This time he was good about picking it up.  We also did (I think) our first gate.  Cupid was a little confused, but good.  We were facing the gate, so first I asked him to move his hindquarters around so I can reach down and unlatch it.  My old horse used to always push the gate open with his nose but Cupid doesn't know that trick so I pushed it open.  Then I asked Cupid to swing his hindquarters the other way so we can walk through.  It was the gate to an empty large paddock, we rode a loop inside along the fence, then walked out and closed the gate behind us.  It's not trail-class worthy yet, I definitely can't keep my hand on it the whole time, but it was a fun exercise. 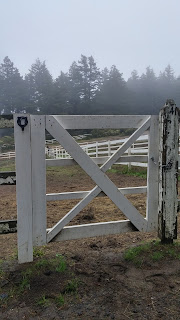 Since then I've had one more ride and a lesson.  Each time I had to be a little firm the first time I ask for a trot, but afterwards Cupid is very good.  We also were able to get the left lead canter each ride.  In our lesson today we did some trot poles (three poles each one trot stride apart) and Cupid was a little excited about it.  We circled before the poles until he relaxed a little, and halted after them.  I went through the line of poles three times halting afterwards.  The next time I went through he was good - until all of the sudden I felt him losing steam under me.  He thought I forgot to halt and would help me out!  He does seem to pick up on patterns.  Originally we were going to end with a crossrail but decided that was enough for today.
Posted by Training Cupid at 3:37 PM No comments: