The days are getting a lot shorter, and we've had our first rains.  Luckily the ground was dry and soaked it up pretty quick so there isn't much mud.  Our outdoor arena had new footing installed.  When I tried it it was still pretty deep but hopefully it will settle and be an improvement.  The indoor was also deep dragged, so was uneven and lumpy for a few days but now it is quite good.

I'm not totally sure what to make of Cupid's health/attitude right now.  He is still sometimes grumpy/sensitive when I ask him to trot.  It is much better, less frequent and if it does happen I just need to ask again and he'll go.  I've also figured out the best position to ask; sitting back slightly but keeping my seat light, and then just a squeeze with my legs at the girth (instead of behind where they tend to slip to).  I was thinking of maybe doing a blood panel to make sure Cupid doesn't have any deficiencies.  I asked my trainer about it and she thought it was worth discussing with the vet; Cupid is due for vaccines anyhow so I can ask then.  Or could it just be the change in season or a growth spurt?  I really don't know, but it is making me a little stressed because he is just not acting like himself.

We had some pretty good flatwork lessons this week, aside from the few times he didn't want to go.  But we got the left lead both lessons!  At first I was still having some trouble, so what we did was go to the right, pick up the right lead, then go across the diagonal changing directions but staying on the right lead to the left.  We went around the short end and down the long end in the counter canter, then I asked for a simple change in the next corner and we got the left lead!  I think Cupid realized it would be easier than continuing to counter canter!  In my last lesson we also started from the right lead, but asked for the simple change on the diagonal and got it the first try, so maybe Cupid remembered.  My trainer said I am usually better about keeping him straight on a diagonal too.

I've been working hard on my position (especially soft elbows, hands closed, and heels down), and on riding more off my outside rein.  An exercise I did was to ride a twenty meter circle at the trot, then do a ten(ish) meter circle between the outside line and centerpoint of the big circle, resisting the urge to pull my inside rein.  My trainer said take and give on the inside rein if I need to, but not hold it.  It also helped having my crop in my outside hand to keep his shoulder from going out, especially going to the left.  It was much easier going to the right.

I finally ordered a tack trunk to go in front of Cupid's stall.  I have so much stuff for him I think I need about 3 more... 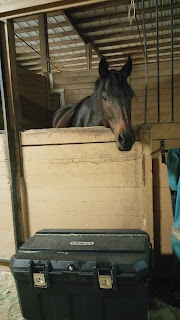 Posted by Training Cupid at 10:49 AM No comments:

Cupid had a little over a week off, with just the ground driving session and a little light lunging.  He kept himself busy chasing around a new horse in his pasture I think.  Today I found him with a new scratch on his neck, looks like it could be teeth marks. 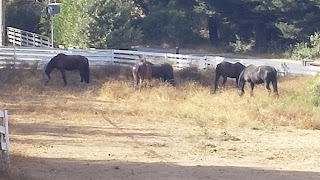 We also decided to do a course of UlcerGard, just in case.  I was told there wouldn't be any bad side effects even if it's not really necessary.  My trainer asked me if he was being "more mouthy than usual" as he was chewing on first some spurs, then his lunge line.  But he's always done that.

Our first ride back was just a light hack around the property.  He seemed to be feeling okay, and was very good about walking through some rough trails that were pretty overgrown.  Though he is getting worst about trying to stop and eat!  We had a little excitement when we walked by a paddock where a horse didn't want to be caught and was running around.  Cupid's head and tail went up and he pranced a little.  He settled down after a few moments though.

I have been longing him before I ride, in case it helps for his back warm up a little before mounting.  I've also been spraying his back with Sore no More spray before currying.

He is still showing a little reluctance to pick up the trot, but is getting better.  Today I couldn't get him to pick up the left lead canter though.  We are not sure why, he seems to be moving very well otherwise.  I will try it on the longe line next this weekend and see if he gets it without my interference.  My trainer said with young horses sometimes it's two steps forward, one step back.

Posted by Training Cupid at 2:00 PM No comments:

Since we can't ride, I decided Cupid and I should try a little ground driving!  It's possible Cupid did a little of this in his early training but I don't know for sure.  My trainer is experienced in it so I knew we would be in good hands regardless.

I started out with a little light longing.  Cupid was less reluctant to go, though the first time I asked him to pick up a trot going to the left he did pin his ears at me and give me a dirty look!  But he trotted around and looked good.  We did a little walk and trot both directions, then I put on his balancing side reins and did a little trot and canter each direction.  He picked up the left lead the first time I asked, but then the second time he was incorrect a few times before he got it.

Then we snapped on a longe line on each side, and let him get used to it running down his side and over his back and behind him, which did not present a problem.  My trainer got into position, behind and slightly to the inside of him, and I was by his head just in case.  She asked Cupid to walk forward with a cluck and he responded right away.  We started out walking around the arena along the rail with a few walk-halt-walks.  Cupid was perfect!  I thought Cupid would be a little confused about a person being behind instead of next to him and try to turn around, but he acted like he knew what he was supposed to do!  We did a few changes of direction down the diagonal as well as turning in a half circle.  Then my trainer had him go in a circle and let the lines get a little longer and got him up to a trot.  Cupid continued to be perfect! 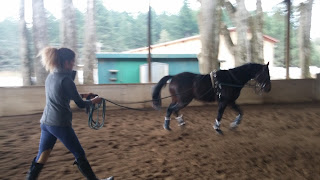 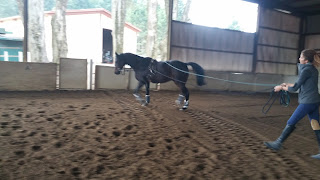 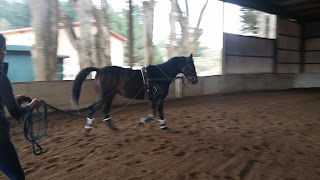 Then it was my turn to take the reins.  I had to resist the urge to get him going by raising and lowering the lines, like how you see them doing on a stagecoach in an old movie!  I tried to keep a light feel on the lines, and make sure we stayed straight.  It was fun, and I was really proud of how good Cupid was.


Posted by Training Cupid at 11:20 AM No comments: