On Sunday Cupid and I saddled up with two other horses and riders from our barn for our first group trail ride.  We went to the same park up the road from our barn that I've taken Cupid to once before.  Cupid seemed to be a little more relaxed with the company, sometimes he gets a little worried being away from home and gets a little quick and whinnies a lot.

Cupid was in the middle.  He was being very good, so when the leader asked if we were okay trotting I said yes and Cupid continued listening and being good.  There were a few tricky parts, like navigating through rocks and the trail was a little rutted in some parts.  There were a few muddy patches, and the lead horse stopped at a bigger puddles so Cupid went to the front and walked through calmly.  We passed a lot of hikers on the trail.  We went out for about an hour before turning back.  Cupid did get a little quick a few times heading home.  At one point when we were in front he started trotting very fast, it took me a few seconds to slow him back down.  So we went back behind one of the other horses for a bit.  Cupid settled back down.  Overall he was a very good boy.  There were a lot of hills, plus a little bit from the nerves, he was very sweaty by the time we got back so I hosed him off.

After his bath I let him graze a little and told him I was very proud.  Then I brushed him off, and wrapped his legs since he worked a longer than usual.
Posted by Training Cupid at 8:22 PM No comments:

Pretty much every morning when I get to the barn Cupid's blankets are in a heap in front of his stall, because he likes to pull them off the bar.  At least he doesn't pull them into his stall and stomp them in the manure!  But when a new trainer moved into the barn and had blanket bags in front of each stall I thought it was a great idea so I went to look online.  As luck would have it Schneider's was having a free embroidery promotion!  So I ordered a blanket bag, and also grooming tote, with Cupid's name on it!

I also got a nice grown up halter for Cupid with a nameplate.  I won't be leaving this in front of his stall because he chews on that too!

We had a really good lesson today, Cupid and I both felt very confident and relaxed.  We started off with some flatwork.  First I had to do some two point, to help strengthen my leg.  We worked on slowing, then increasing, the trot.  Then we did some circles working on a bend and a little bit of counterbend.  We did a little canter work, first on a circle with me focusing on sitting, then around the whole arena in two point.  I'm still working on not pumping with my arms and upper body, and it's getting better.

Then we got to the jumping.  We started with just a single crossbar to warm up, and I could tell it would be a good day.  Cupid was very calm, trotting in and cantering out quietly.  We worked up to a one stride combo and really focused on my position - sitting a little more upright and supporting with my leg.  Cupid tends to drift to the left a little, so I tried to make sure I kept my left leg on and kept him straight after the jump.  After a few times my trainer suggested we stop in a straight line after the jump.  Cupid stopped nicely, and the second time through after we landed he was kind of looking to me like, are we going to stop or do you want me to go?  He picks up on things pretty quick, and figures out how to make adjustments if needed.
Posted by Training Cupid at 11:52 AM No comments:

I admit, I have a shopping problem!  The internet makes it so easy.  On a slow day at work I am always browsing online.  I recently got new open front jumping boots.  I've been jumping Cupid without any leg protection, in part (as mean as it sounds) to help him learn to be careful and not hit jumps.  He's actually always been pretty careful though.  Well he'll still feel the jumps with the open fronts, but the backs and sides will be protected.  After a lot of consideration and trainer input, I've decided on the Eskadron Air open front boots.  His legs shouldn't overheat in these.  As an added bonus, they come in navy!
Cupid also received a lovely new dressage bridle on his birthday.  It has double raised detailing on the browband and noseband, a crank noseband with flash (which I usually leave fairly loose), and has a monocrown and padding for comfort.


Posted by Training Cupid at 11:26 AM No comments:

My new trainer rode Cupid for the first time today.  It was fun watching him go, he looked really nice!  She had him on the bit and moving really nicely.  Cupid was very good and didn't seem confused to have someone new on him.  He looks like a much bigger horse when he's moving out. 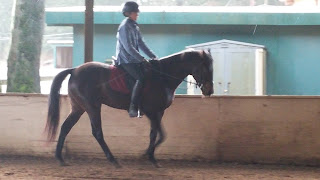 Afterwards I got on him and I have to say he felt very light and forward.  I worked on maintaining contact through transitions as I have a habit of throwing my hands forward to encourage him to go, which of course is incorrect!  I'm still working on keeping my hands closed, elbows bent, and seat in the saddle.  As well as keeping my heels down, and wrists straight. ::sigh::  So much to remember!  I fix one thing but that throws something else off!  It really makes me wish I had spent more time on this in the beginning so the bad habits wouldn't be so ingrained.
Posted by Training Cupid at 11:31 AM No comments:

Cupid turned 5 this weekend.  I brought him a carrot bouquet, which he seemed pretty happy about. https://www.youtube.com/watch?v=yue0WA0TIso 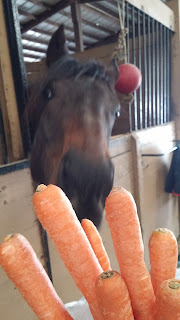 I was a little worried because his right hind leg looked a little puffy, but it didn't have any heat, so I decided we would just take it easy and see if he works out of it.  We just walked around the property for about half an hour and had a nice time.  We went up the little trail he likes to scramble up, I felt him start to gather himself and gave a little half halt and he walked up quietly so I told him he was a good boy.  He didn't seem lame and his leg was looking better by the end of our walk.

After our ride I gave him a bath, for the first time in months.  He was filthy!  He was very good.  Sometimes he seems a little anxious in the wash rack, but he was very good and didn't whinny at all.  Then I let him graze as he dried.  He was very fluffy and smelled nice! 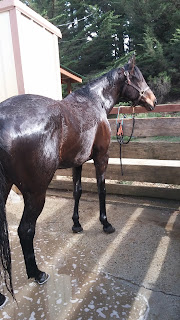 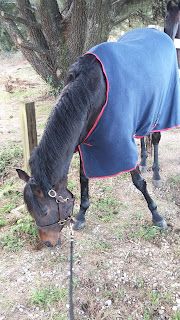 To top it off he got extra goodies in his grain.  I think Cupid enjoyed his birthday! 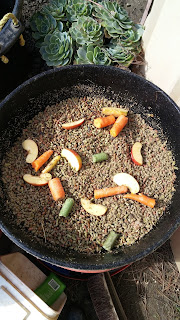 Posted by Training Cupid at 10:58 AM No comments:

I ride in the mornings before work, and am usually the first person at the barn.  Today I opened the barn door to find the barn aisle covered in water!  I was surprised for a moment, even though it was raining the rain wasn't that hard and had never flooded the barn like that before.  Then I heard running water and realized one of the horses broke his automatic waterer so water was just spilling out the pipe!  Luckily there is a shut off valve above each waterer so I was able to turn it off easily.  Then I called the barn manager and let him know what happened.
Cupid was moved to a different stall just a few days ago, and his stall pretty much the worst hit by the water!  There was water several inches deep right outside.  At first I didn't like that his stall had a little step up into it, but it turned out to be a good thing today because even though I had to wade through the water to get to him his stall was dry inside.  But he had pulled  his blankets off the rack and dropped them in the water!