Having a trainer to keep us focused and push us forward is a tremendous help to Cupid's and my progress.  In our lesson this weekend we started out reviewing what we worked on last time, and the trainer said we've made improvement.  He even said I was sitting up a lot straighter, yay.  We worked on doing a little leg yielding through the turns, first at a walk then trot.  Then we worked a trot poles, gradually increasing the distance between them a little to get Cupid to lengthen his stride.  He was good at this exercise, though I still need to work on planning ahead to get a straight line in to the poles because I usually turn a little late.

Then the trainer asked me if we've cantered poles.  I told him no, because until recently Cupid was a little unbalanced and too hard to maneuver.  So he set up two poles a few strides apart.  Our first attempt Cupid broke to a trot at the first pole, maybe he just thought we always trot poles so that must be the right thing to do.  We tried again and I kept a little more leg on and he did it beautifully!  We did it on the right lead a few times, and Cupid was perfect and totally unfazed.

We took a little break, then it was time for the left lead canter.  We tried from a trot in a 10 meter circle, and got it wrong.  Then Cupid was getting a little fussy - keeping him trotting on the circle until he relaxes a little.  The trainer said I need to ask in the corner right before we hit the wall instead of coming out of it.  This is a bit of a mental block for me, I'm just more comfortable asking after the corner but he assured me Cupid will not run into the wall or attempt to jump it.  It took a few tries but we got it.  We couldn't get as nice neat a circle to the left but it's getting better.  Then my attention wavered for a moment and Cupid broke into a trot - my fault.  And I just let him because I didn't want to ask again and get it wrong.  The trainer told me I need to stop thinking like that - and later in the lesson when Cupid broke I asked right away and he picked up the left lead beautifully!  We did one pole on a circle to the left a few times, then trotted over the pole and did a figure-8 to canter a right circle in a figure 8 over the single pole.  I know I've said it before but Cupid has a great canter, and now it's a bit more controlled but feels powerful.

Cupid was a great boy for our lesson, and he was understandably quite exhausted after! 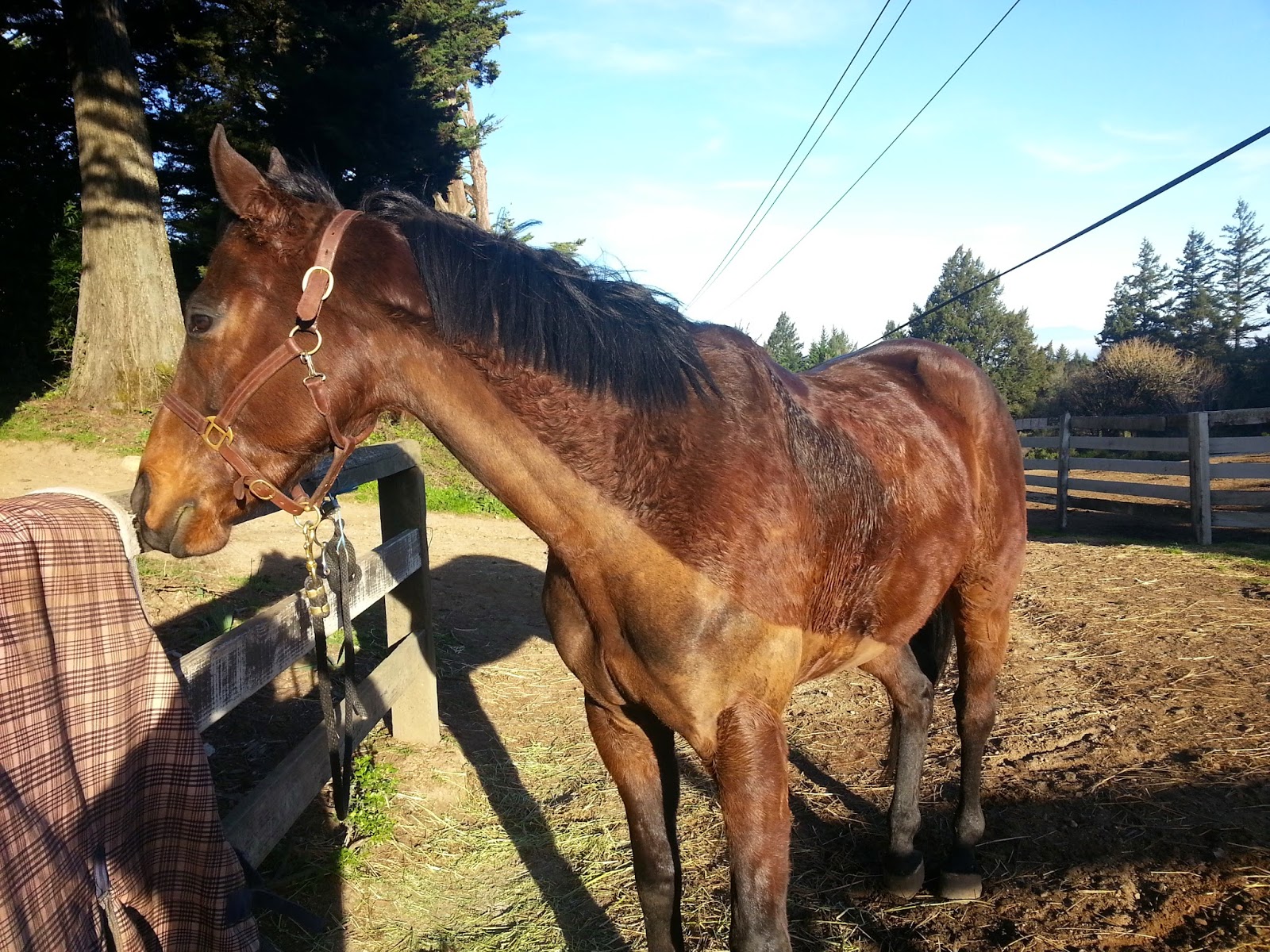 On Sunday we just did a nice relaxing walk around the property.  Next week we have 2 lessons planned.  Poor Cupid, but he will be in great shape before long.


Posted by Training Cupid at 11:12 AM No comments:

Cupid turned 4 on February 14th.  We went on a little trail ride on one of the trails we often ride plus around the property.  He was a very good boy and we didn't encounter anything that scared him.  Then I gave him extra treats in his grain. 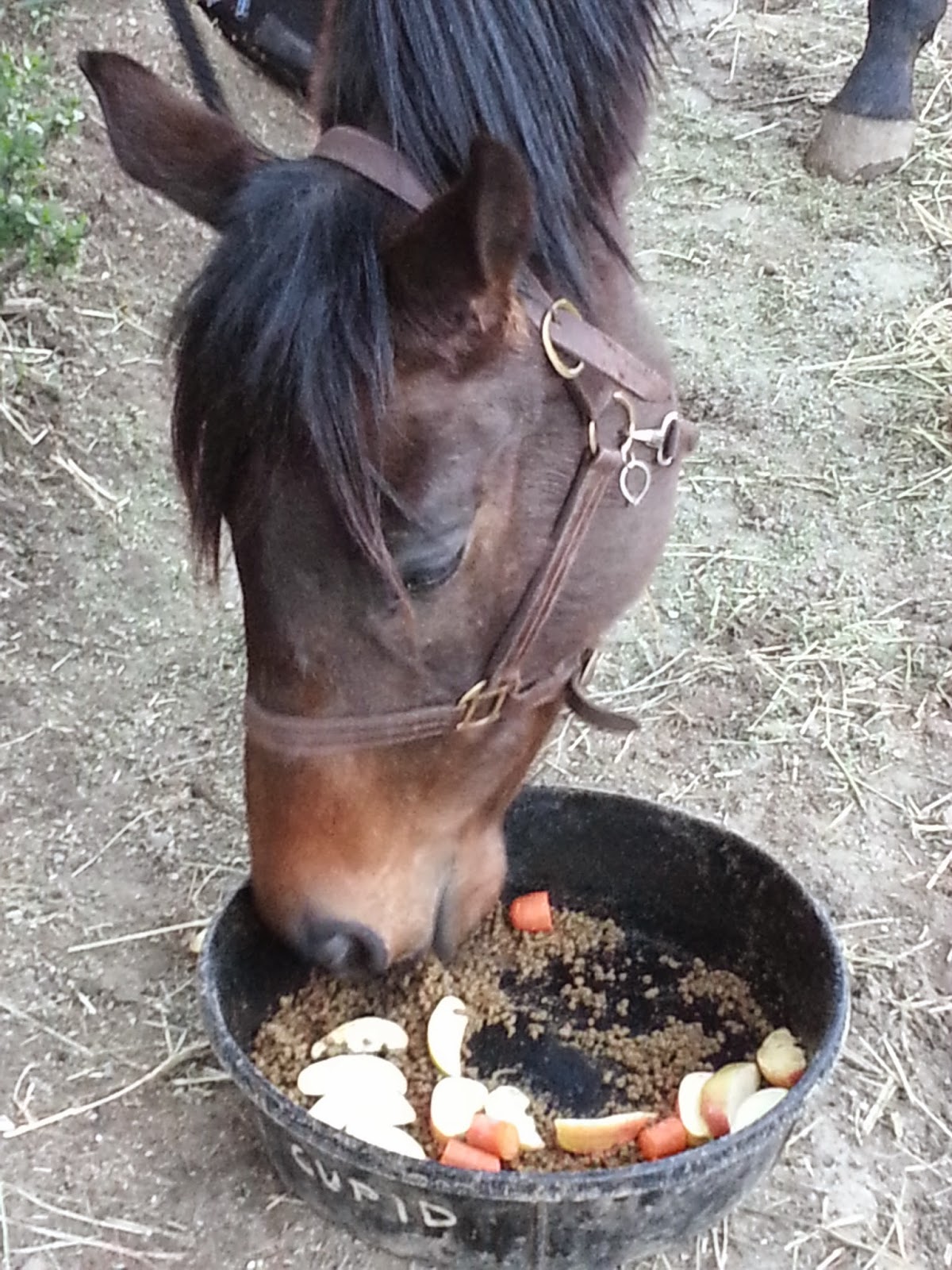 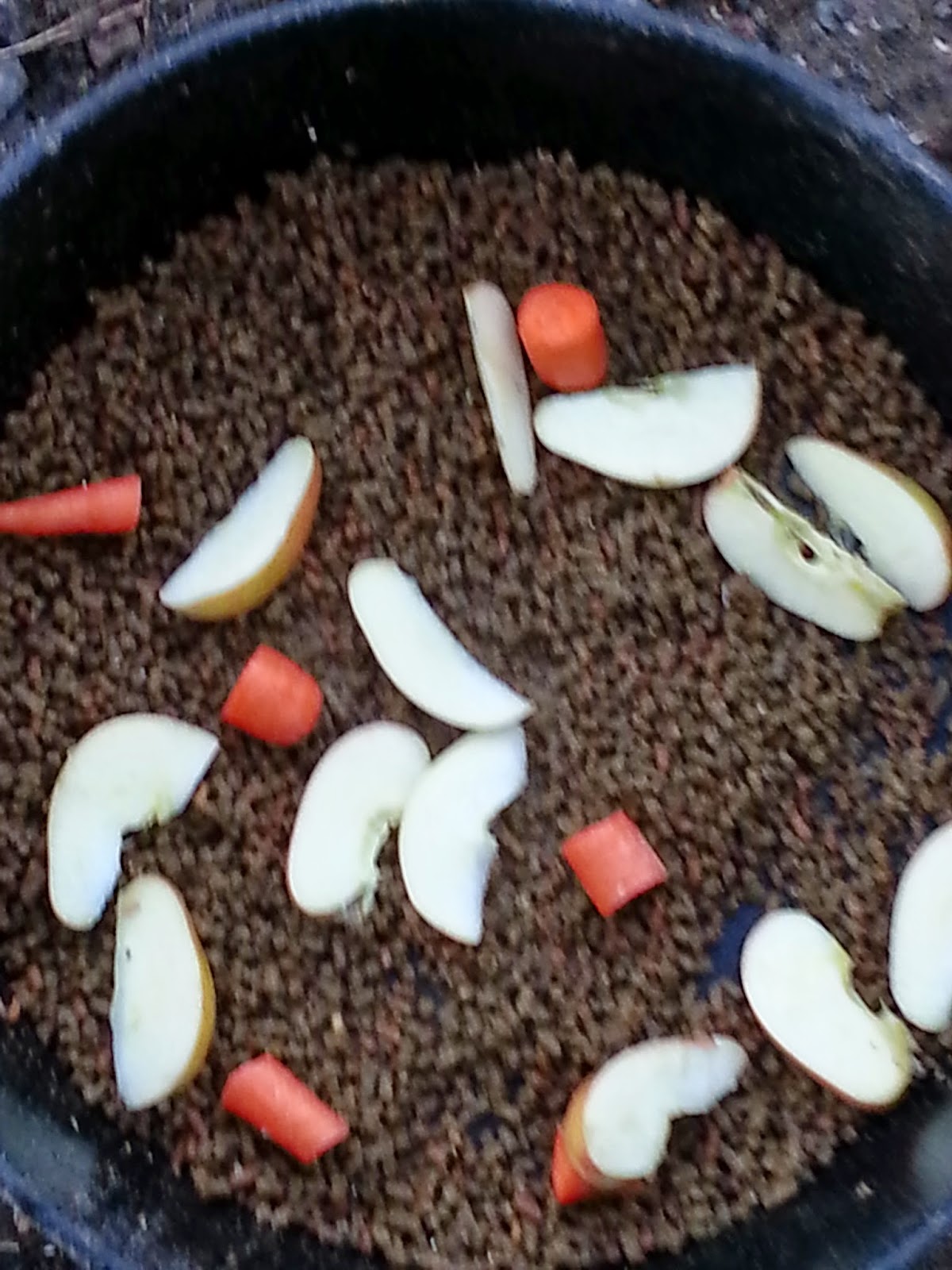 The next day on Sunday we rode in the uncovered arena which was finally back open after the recent rains.  It is much smaller than the covered arena, but we had it to ourselves which was nice.  I set up a cavaletti on the medium height because it's good for Cupid's strength to step over them.  However we ended up inadvertently having our first jump!  Cupid trotted calmly towards the cavaletti and unexpectedly I felt both front legs coming up before Cupid calmly trotted off.  I didn't make a big deal out of it, as long as he isn't rushing it's okay.  We got the right lead canter correct on the first try but took a few attempts to get the left - a little disappointing since we got it right the first try on Friday.  I think we will both benefit from a day off on Monday! 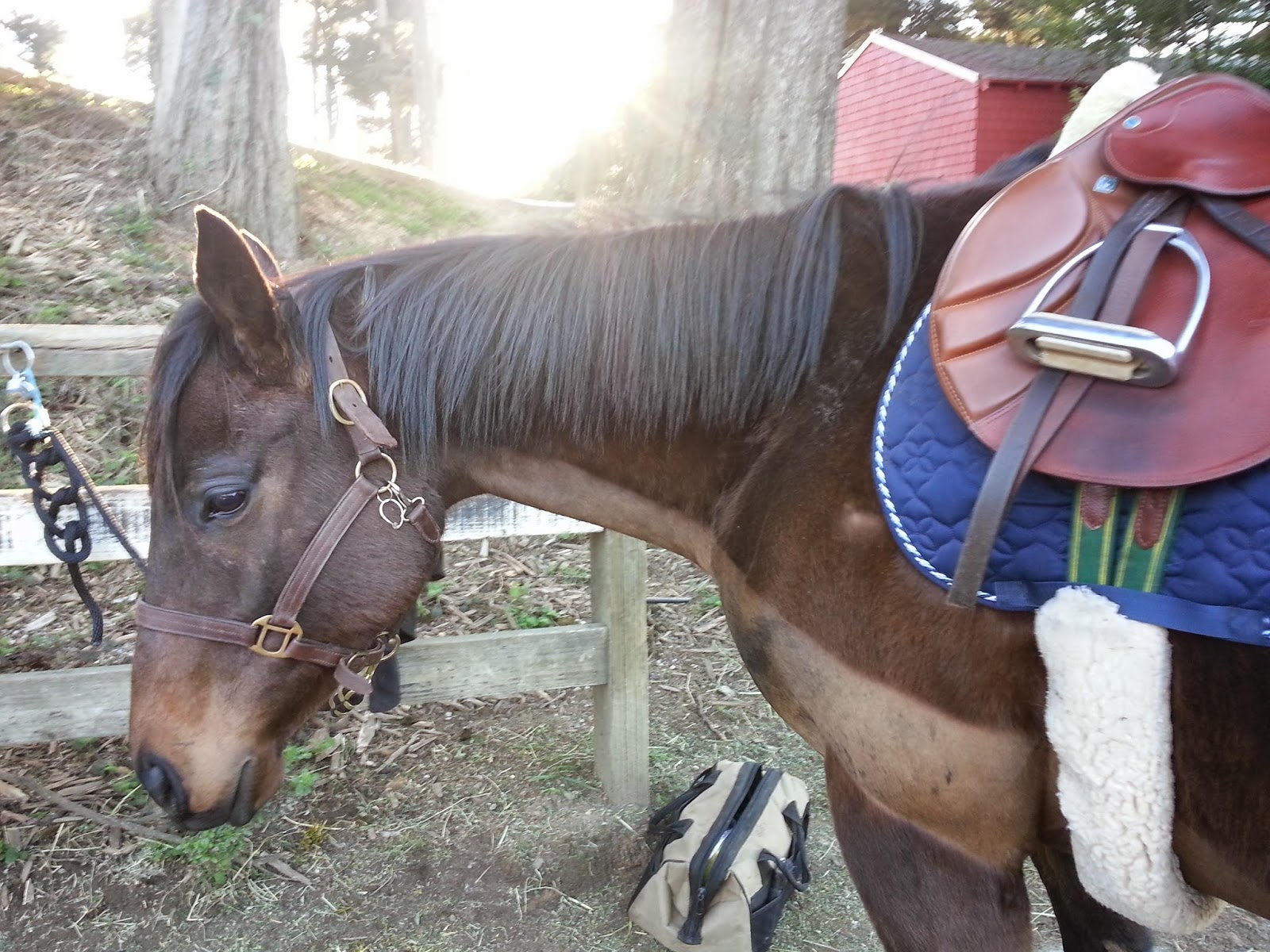 Posted by Training Cupid at 3:05 PM No comments:

Last weekend two things happened for the first time since December.  First, the rain was back with a vengeance.  Good thing Cupid's new pasture has a covered area!  Second, Cupid and I had a lesson.  We are starting with a new trainer who focuses primarily on jumpers and eventers.  I told him about Cupid's background and the lessons started out with him observing us for a few minutes.  Then he started calling out instructions and pointers.  Just a few little tweaks helped tremendously!  Instead of thinking about "shoulders back" think "chest open."  Instead of "sit up straight" think "sit back on your butt."  He gave a tip on corners to point my inside hip towards Cupid's outside ear, and Cupid seemed to really understand this and was bending his body much better through the turns!  It is almost crazy to think how responsive this thousand pound animal is to a small shift in the riders weight.  We ended the lesson with a little right lead canter work, and for the first time instead of loping around the entire arena we stayed in a much more balanced canter on a circle.  Having a trainer really helps with my focus and discipline, and I'm looking forward to seeing how Cupid and I will progress. 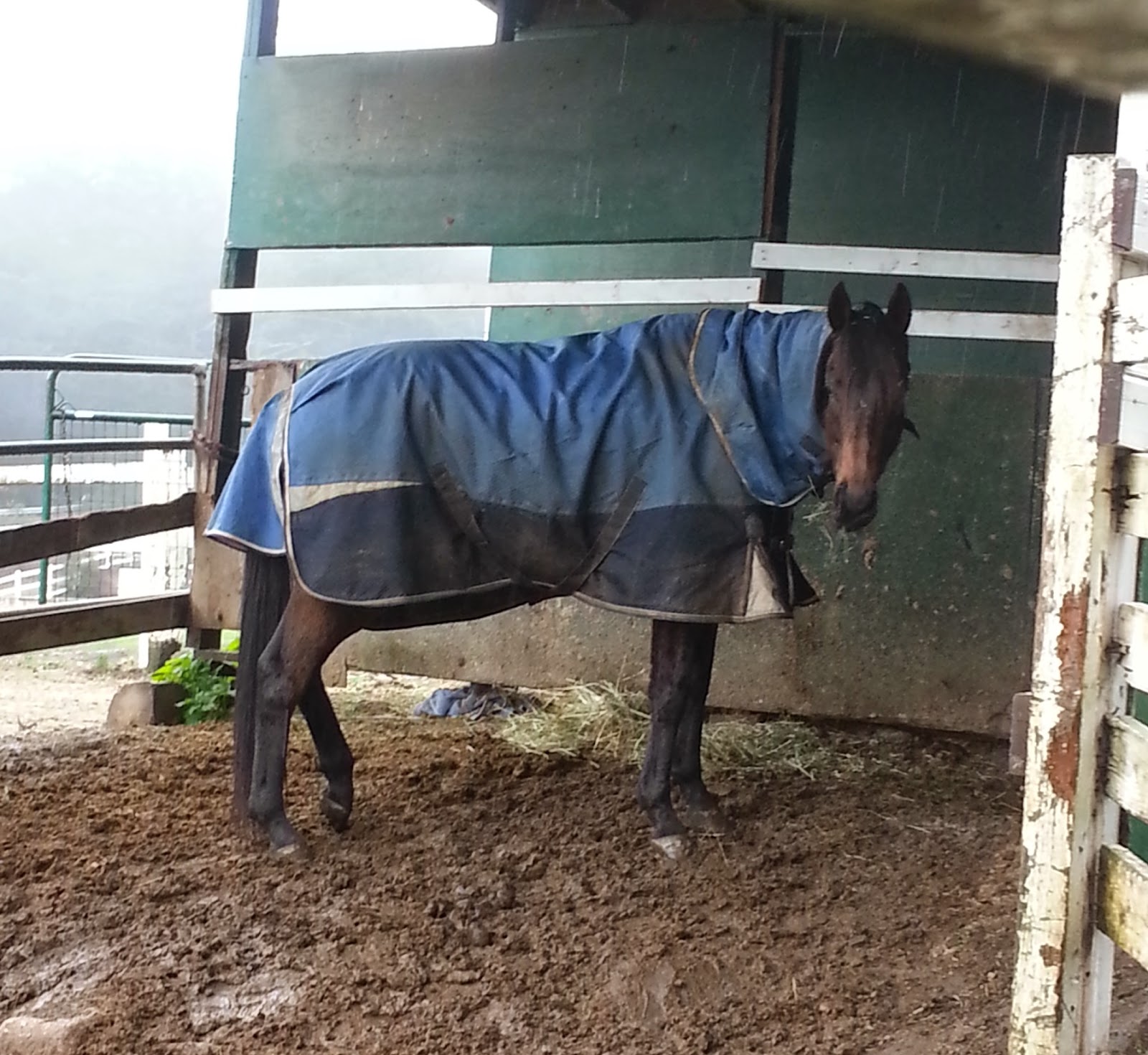 For our second lesson, we continued to work on my position as well as bending/turns.  Our trainer set up some cone to mark a 20 meter circle, as well as two 10 meter circles for a figure eight.  We started out walking the figure eight, focusing on using my legs/seat instead of hands to make sure Cupid didn't stray too far off the track as well as bending his body properly.  As always, going to the left was more difficult.  Then once we got the hang of it we did it at a trot.  The circles were smaller then what I usually do and I wasn't sure we could make it at the trot, but we did.  Often times Cupid can do more then I expect of him, and having the trainer is very helpful to me to push us both a little more.  We cantered the 20 meter circle, focusing on getting a better departure without a quickening trot.  We tried the left lead, but couldn't pick it up in a few attempts and Cupid was getting a little flustered and high-headed.  The trainer said we should not force it today and went back to the trot circles until Cupid was settled and ended up with one more right lead canter.  Cupid cantered the circle beautifully, and it was the best and most balanced canter I've done on him yet!  Unfortunately the trainer recommended lunging on a loose side rein, a short session each time before I ride as often as I can.  It is not a favored activity for either Cupid or I but I'll give it a try.
Posted by Training Cupid at 12:11 PM No comments:

The weather has been very nice lately, though generally after work it is still dark by the time I get out to Cupid.  So on the weekends I try to take advantage of the daylight, and the last two days Cupid and I were able to go on mini trail rides before short arena sessions.  Hopefully this keeps him more interested in his work!
On Saturday it was a little windy, and he was a little nervous about something which I think was the wind in a tree.  He stopped and hesitated a few times but I was able to get him to walk past it.  We rode past where he once saw the person cleaning the gutter on the ladder and I think he was expecting it again because he was a little nervous but walked by it then was fine.  I just wanted to do a brief canter in the ring after our little trail ride, not realizing that there were a few jumping lessons going on.  They were jumping courses so the rest of the horses pretty much had to stay on the rail.  Luckily Cupid is not distracted or disturbed by other horses flying by.  We did a little walk-trot, then picked up the right lead canter for about a lap.  Then a little more walk-trot, while I tried to decide if it was worth trying to get the left lead with all the other horses around.  I decided to go for it and we got it on the second try!  I always try to give him a lot of praise when he gets it.  We went about once around on the left lead, then a big pat and told him he was done.
On Sunday we went on a slightly different path.  We went down the trail along the electric fence that Cupid has always been scared of.  He was hesitant again and I had to tap him every few steps when he would stop, but eventually we got down the scary trail.  Originally I thought it was the fence, but I think he just doesn't like that the trail is down hill with tall bushes on either side, somehow it's scary for him.  It is just a short keyhole shaped trail, on a clear day you can see all the way to the ocean.  At the end by the key hole there is a pile of old straw, but Cupid walked right by that without even a look.  We trotted a bit and then galloped up the little hill.  It felt awesome!  Though Cupid did get a little tired by the top.  We then walked around the property a bit more and finished up with walking and trotting some figures and circles in the sand ring outside.  I dismounted and Cupid decided that he should be the once to carry the crop. 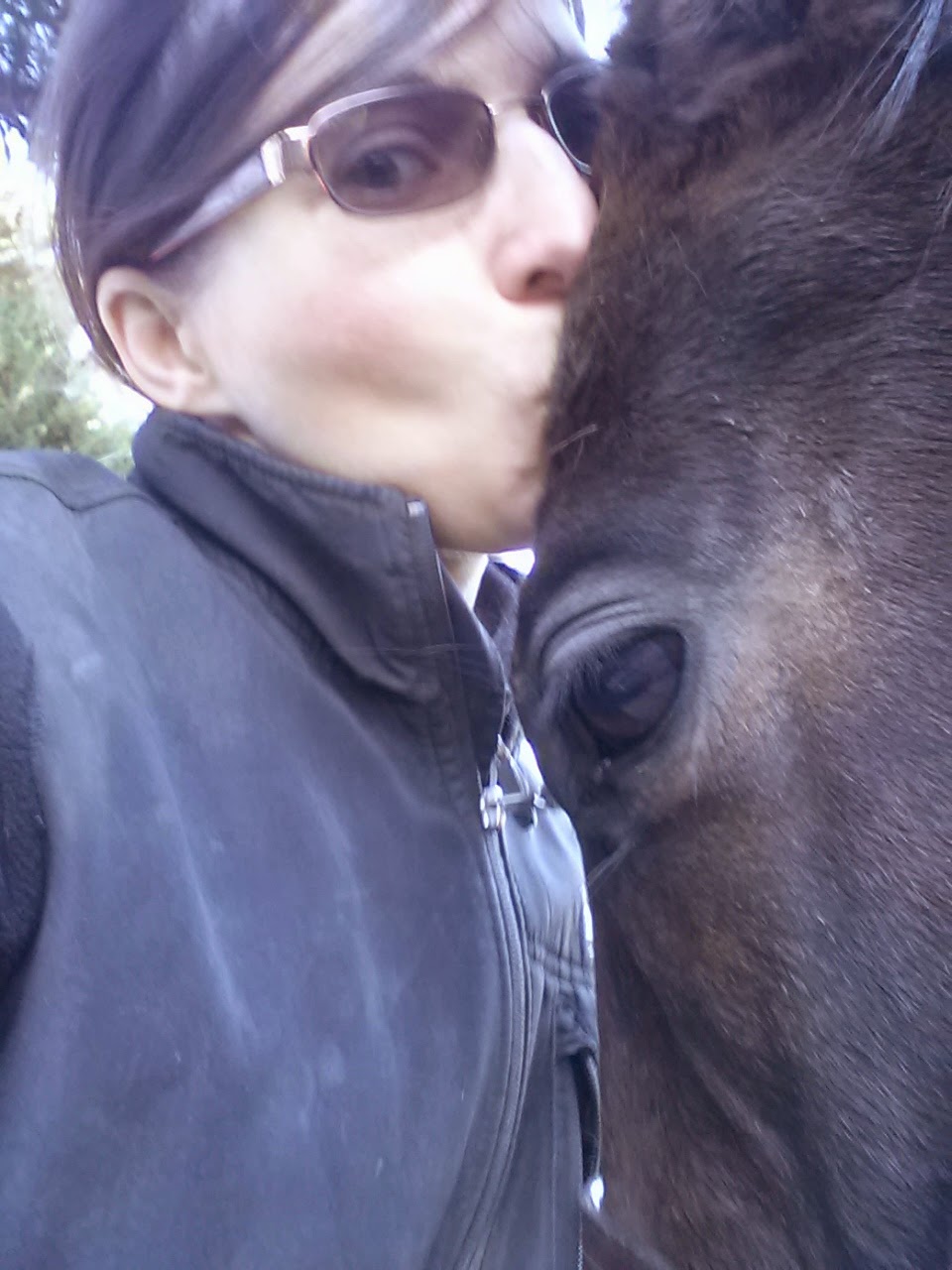 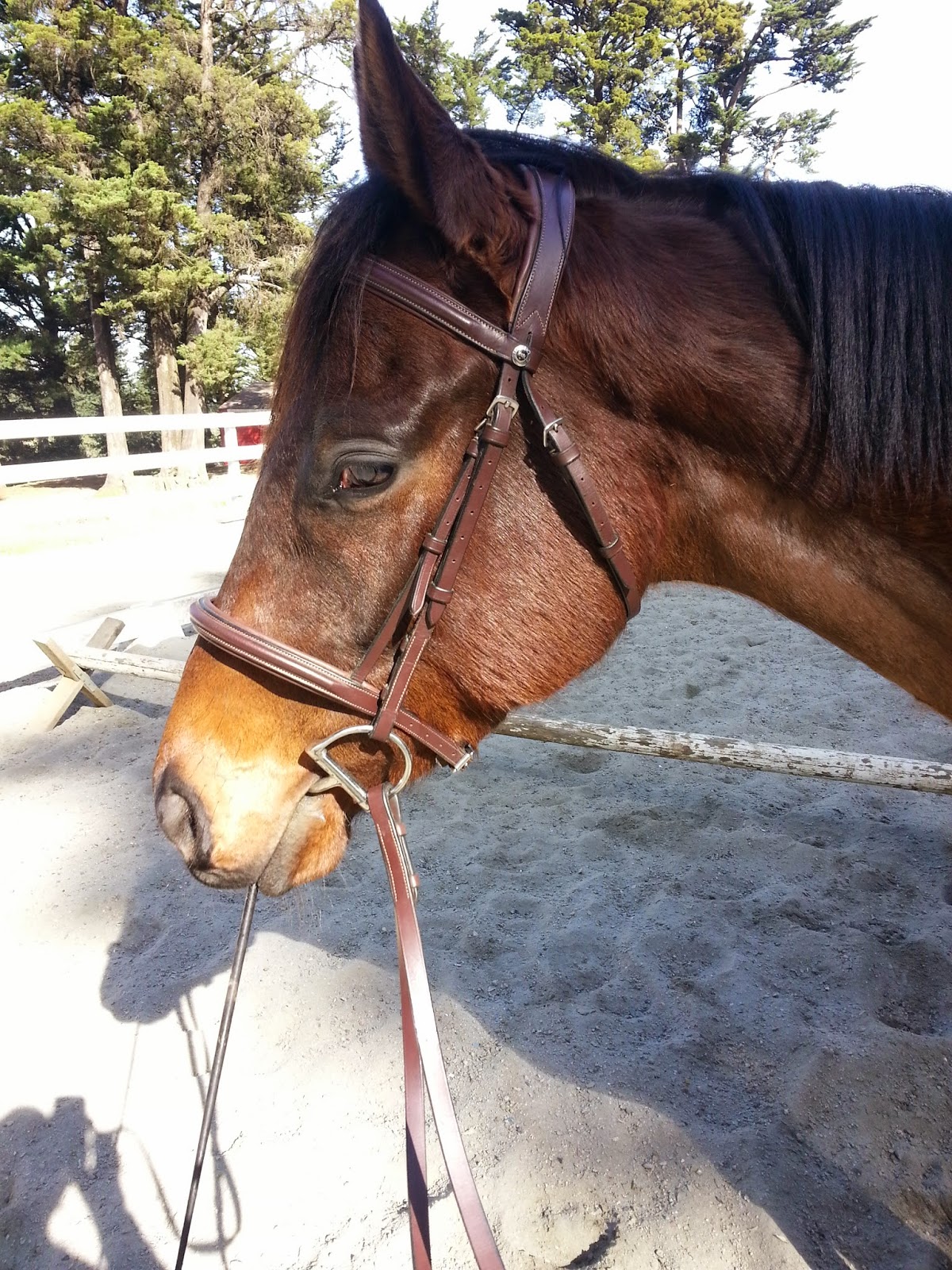 Posted by Training Cupid at 2:23 PM No comments: