Cupid and I went to a show at a new to us venue.  It turns out he does not love this venue, and was pretty tense.  I knew it was bad when he wouldn't even eat a carrot the whole day, which is very unlike him!  I'm not sure why he was so tense, he's been handling other new places fairly well and I thought this place was pretty inviting in that the warm up was adjacent to the show ring, so you always had other horses around.

We did Training 2 and 3 again.  I wasn't thrilled with how it felt because Cupid felt tense and braced.  He kind of leapt into the canter both directions.  But there weren't any major mistakes, and the judge was seemingly in a generous mood.  So I was thrilled to see two 7s on our first test.  And our first ever 8 in our second test!!  It was for our first halt, with our final halt earning a 7.5.  I was equally thrilled to see a 6.5 for the canter circles both directions, which I think is also a first.

I think the scoring was generous, but I was ecstatic nonetheless!  Kind of made up for our last show, which felt a lot better to me but our scores were dismal.  We earned a qualifying score in case we want to think about pointing to championships next year, though I'm not sure if it's worth it for us.  My main goal will be getting ready for First Level hopefully early next year.  I'm a little sad we weren't able to finish the year there but now that I'm finally starting to understand dressage I can see we're not quite ready.  Haha, the more you learn the more you realize how little you actually know!  (or something like that)

Can a Thoroughbred Work Cows?

Obviously the answer is yes, but can Cupid?  This weekend we went to an Intro to Cattle clinic to find out!  Cupid has seen cattle from a bit of a distance, and ridden through cow pastures without problem, but I wasn't sure how it would go being in close quarters or if they take off.  Luckily, Cupid handled it really well!  This clinic was organized by our regional Working Equitation group, and led by Heather Kornemann.

The day got off to a bit of a rough start, as I had packed my trailer the night before but couldn't find my keys in the morning.  I spent some time looking for them, then gave up and grabbed all my back up tack so I could still ride, but unfortunately not with what I planned to use.  So instead of the comfort snaffle we've been riding in, we had our double jointed snaffle (which led to a bit of chomping), and instead of my jump saddle I had my dressage saddle (having recently sold my western saddle, which Cupid hated anyways).  And instead of my short boots, I luckily was able to zip my tall boots over my jeans (but also confirms what I have been suspecting, that I should probably go with slim boots next time).  So a bit behind schedule, and without my preferred gear, we missed the orientation but  made it just in time to ride in our group.

There were about a dozen cows in the arena, all huddled down at one end.  There were 4 horse and rider clinic participants including Cupid and me, and our trainer Heather and I think 3 mounted assistants in the ring.  The participants took turns letting our horses approach and get used to the cows, with Heather staying close.  Cupid was interested in the cows, and not scared to walk right up to them.  We walked among the herd, between the herd and the fence, and started playing a bit with pushing them.

In working equitation, you have three minutes to cut your designated cow from the herd and move it into a holding pen.  You are on a team of 3 or 4, but your team members have to stand behind a line until you get your cow past that line, at which point they can assist with getting the cow into the pen (but also have to keep the other cows behind the line, I believe.)

In this clinic, our objective was to pick a cow, cut it from the herd, and move it down the arena across the line of other horses and riders.  We each took turns, and while you were waiting your turn you did not assist but stayed out of the way, and moved aside when necessary to create a hole for the cow to go through.  It was kind of like a group jumping lesson, which we haven't done in a very long time so it was also good for Cupid just to practice standing.  Sometimes starting out he is a bit antsy, but he was on his best behavior today (aside from some bit chomping, which I think was because I haven't ridden him in the double jointed bit in a long time.)

After making sure Cupid was comfortable, we gave the cutting and sorting a try.  Our first few turns I made the mistake of just going for the cow closest to the line we needed to cross.  And also trying to move them along the fence, thinking it would be easier because then I just have to watch one side.  But apparently these are bad strategies!  We did manage to get it done, if not gracefully.  Back to my original question, Cupid doesn't really have the instinct to cut a cow or anticipate where it's going to go, so he lets them get away but then seems to have fun chasing after them!  (Haha, maybe he wants to be a roping horse?  Let's try that next!!)

After a few goes, he seemed to start getting a bit anxious.  Heather said it seems like he is a very task-oriented horse, and to just forget our task for the moment and just relax and let him play.  Just before she said this, I had been thinking that it seems like he knows I want something, but can't quite figure out what it is and might be getting a bit frustrated.  I let me reins lengthen and let Cupid walk among the cows, sniff them, and trot after them - as long as he was remaining engaged.  Occasionally if he started to wander I would turn him back.  So some of our turns we cut and sorted, some we just played. 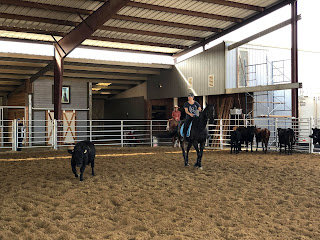 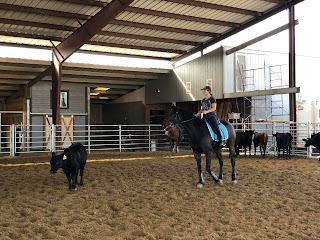 This clinic was a ton of fun!!!  I'm really glad I got to try something new, and build my relationship with Cupid in a different way!  It will take a lot more practice for us to learn to read the cows and really get the hang of this, but I'm definitely looking forward to trying again.

Posted by Training Cupid at 2:34 PM No comments:

I read some blog posts and comments online about people dyeing their sunshirts and breeches.  And they made it sound pretty easy!  I had a pair of white breeches I got for shows, that just wasn't show quality anymore but I still didn't want to wear white to school is so I figured I'd give this dyeing thing a try.  And I'm here to say, for us mere mortals that are not particularly crafty, it is not idiot proof.  My hats off to those of you who were able to do this correctly!

My breeches were 95% cotton, 5% spandex so I got the "all purpose" dye not the one for synthetics.  Mind you, this is supposed to be the easier one because you don't need to do it over the stove.  I just dumped the dye into a large plastic tub with hot water and some dishwash detergent.  Then I put in the breeches, which I ran under water first.  I used gloves to submerge the breeches in the dye water, and gently moved it occasionally as I let it soak for about an hour.  Then, as per the directions I ran the breeches under running water until the water ran clear, and then put them in the dryer with a towel. 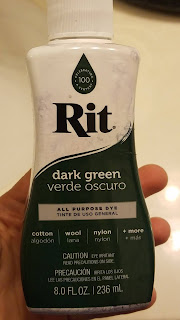 Clearly, I shouldn't quit my day job to pursue arts and crafts!  The results are far from perfect.  There are light colored blotches on a big section of the front.  And then a dark colored stain on the leg.  I'll keep them for schooling because I'm not one of those gorgeously put together people you see on other blogs, who look just as nice leaving the barn as they did when they arrived.  Sadly that is just not me, as hard as I try usually I leave the barn with the frizzy messy hair and smudges of dirt or horse hair. 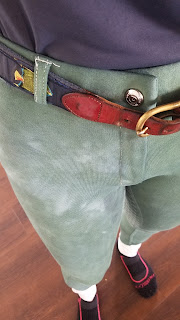 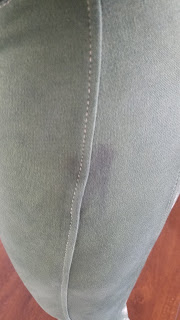 Overall the color is much brighter and lighter than I expected from the "dark green" dye.  (The picture below is a better representation of the actual color than the ones above.)  As you can kind of see in the picture above, the sock bottoms stayed white and the silicon is white as well.  This I kind of like.  The stitching on the seams stayed white as well. 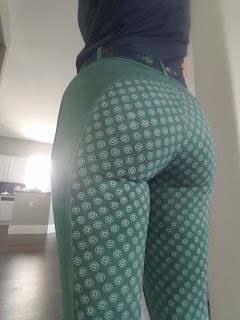 I have a bottle of blue dye for synthetics that I was going to use for a lighter blue sunshirt I wanted to darken, but I don't think I should bother...