Even though I was planning on going to this show for a while, I didn't have much opportunity to prepare.  This is the busiest time of year at my work, and though I've still been riding I've had to keep my rides pretty short (often just 20-30 minutes).  Plus I haven't had a lesson in over a week since my coach has also been busy.  I've done Training 1 several times now, but this was my first time doing Training 3 so I was really hoping my mind wouldn't go blank midway through!

My ride time wasn't until the afternoon, and it was hot!  In the 80s, compared to barely 60 most of the last few weeks.  Cupid was struggling a bit, he started breathing pretty hard after only about 10-15 minutes.  The warm up ring is surrounded by a tall hedge, and in the past Cupid was a little spooky in the corner but this time he was great.  We kept our warm up pretty easy: several minutes of walking, trot work with 20 meter circles and a few smaller circles to the outside the other direction.  We did a little canter to the left.  Again not getting the left lead first try, but felt good once we got it.  Then we just walked and were able to go a bit early, since Cupid was starting to get tired.

Training 1 felt good.  We had a few mistakes: not getting the left lead on first try and then breaking early, and I was a little late asking for the walk to trot transition.  Our lowest score was a 4 for the left lead canter, and our best score was an 8 for the final halt  We also got a 7.5 for our first halt and the free walk.  The collective comments said we need a rounder outline and more overall suppleness and bend.

I took Cupid back to the trailer to get water, then just walked until our second round which we also were able to do early.  It was good to go through this test at a low key schooling show, since the loops are new.  We got some feedback that we need more bend through them, which was helpful.  We again had trouble with the left lead - getting it eventually but not on first ask, and got a 3 there.  At least we were able to maintain it around the arena, even though our down transition was a bit shy of X.  Cupid spontaneously broke into a canter when we were trotting, and we messed up the first halt (got a 4 - but did much better with a 7 for the final one).  Our best score was the trot-walk transition and medium walk, which was an 8, then a 7.5 for the free walk.  We got a few 7s near the end, so managed to stay just above 60.  The collectives said more suppleness and relaxation needed - "better balance, not so much speed".  I agree with the first part, but aside from the spontaneous canter I'm not quite sure what the judge meant about less speed.  Cupid can get quick sometimes, but he didn't feel that way to me.

Overall I thought it was a great experience and felt very good about the show.  I'm still struggling with the whole dressage thing - I'm still not quite sure how I'm supposed to achieve the proper "frame" without feeling like I'm hauling on my horse's face, but hopefully we will get there.

Cupid does not seem very sensitive to tack changes - which overall is good but does cause some challenges for me because it keeps me guessing.  I tried several bits when I first got him, but he was equally green with bad steering but amenable personality no matter what so I settled on a nice Myler Comfort Snaffle.  I've kept that as his "jumping" bit, and for trails.  But I think about 2 years ago I started riding him in a Herm Sprenger loose ring w/ lozenge for dressage.  Mainly just because it is a more typical "dressage-y" bit and he doesn't seem to care.  But lately he's been a little more nose in the air and just a bit busier in his mouth.  His teeth got done a few weeks ago - I will have the vet take a quick look next time he's out just in case, but he is eating fine.  But Cupid has seemed a little happier with the Comfort Snaffle so I'm primarily using that for now.

Work has been very busy so I've been keeping my rides a bit shorter, but trying to focus on quality.  And manners a bit, since I've gotten a bit lax and let Cupid get into the habit of walking off while I'm mounting, or letting him nose everything around him instead of standing still while I'm tightening his girth.  Also making sure he is responding promptly when I ask him to move out, which he's actually been good about.  I've been trying to start rides with my whip behind my back and elbows, to stretch out the front of my chest and hopefully create some muscle memory that my elbows should in fact be bent.  Aside from that we've mainly been doing a lot of bending and leg yields, and moving between a stretching and working frame.  We've been doing about 15 minute trot sets, which go by so quick I don't even realize it.  We are going to a very low-key schooling show this weekend.

Despite being well into May, after the one warm day a week ago the weather has been pretty cold.  Cupid's barn is near the coast, and it can get very foggy and windy.  Luckily though Cupid has been behaving perfectly, and is even getting a lot more steady in the outdoor arena.

We had a fun, varied week.  Continuing to work on connection in our lessons and practicing our loops for Training test 3, and we also did some ground driving and in hand work, popped over some jumps (including a 2' oxer with flowers underneath - not big but the biggest I've done lately), and went on another trail ride at Huddart park.  Nothing really specific to report, Cupid's been pretty perfect.

Cupid and I have had steady but unremarkable rides since I got back.  Not surprisingly, he was fine after 5 days off - his usual slightly lazy self.  Our lessons have mainly been continuing to focus on steadying my contact through the reins (especially the outside rein). 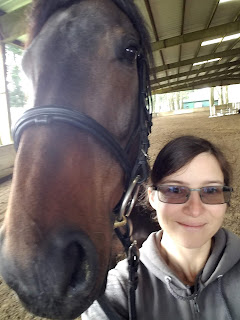 One exercise we've started is doing a lot of transitions between a stretchy trot and more working frame, especially near the beginning of our ride.  Cupid likes stretching down, and it is good practice for me to ask him to come back up a little, while trying to make sure we don't tip onto the forehand.

We've also been doing a lot of serpentines, and our last lesson my trainer had us add a 10 meter circle in each loop so we get more bend.

The left lead canter is improving.  We still don't get it 100% of the time but it's gotten a lot more consistent.  I'm looking ahead at Training test 3, which has a longer canter to the left.  Cupid still has a tendency to drop to a trot, especially if he hits a slightly deeper spot in the arena so we're working on that.

On Saturday there were some small jumps set up in the arena so I trotted a few.  It was much warmer than it has been and Cupid was pretty low energy.  The first time over he didn't even canter out.  Then he would, but was pretty much ready to walk again a few strides out, lol.

Today we did some ground driving and in hand work.  I can back him up straight if I stand at his right shoulder, but if I'm on his left then he always swings to the right so we need to work on that.  (If I ask him to back up when I'm on him it's usually not straight either.)  The side passing went well. 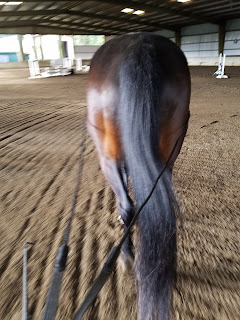 Cupid is currently getting a few days off, as I'm writing this from DC where I am for a conference.  We did have a few good rides though before I left.

Monday, the day after the show, I gave Cupid off.

Tuesday I did some ground driving.  I'm still working on not letting him drift off the rail, but overall he was pretty good.  When I asked him to step over a jump filler with pink flowers he did avoid it the first few times, so I moved to his head and led him over.  He was better after that, but I did have to make sure to keep him straight.  Going over the cavaletti was much smoother.

On Wednesday we had a very productive lesson in the outdoor ring, the kind of ride I wish I had at the show!  Once again we got the left lead, like it was no big deal.

Thursday we did a little jumping.  We started with trot poles, and ended up with a little course that involved trotting over the poles, picking up the canter to the left and circling around to a caveletti, switching to the right lead and going over another cavaletti, and then a little cross rail.  Cupid got the left lead correct each time, and after the first time through he even changed leads over the first cavaletti by himself!  Although we haven't been doing much jumping lately I think it's good for Cupid to mix it up, and when he is being this good and relaxed I enjoy it too.

I'll be gone Friday through Tuesday, and am looking forward to riding again on Wednesday. 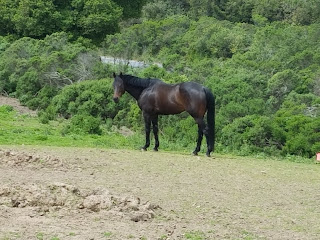 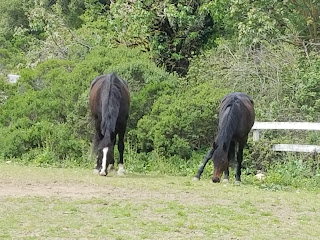