Cupid's made a lot progress towards recovery in the past week.  The wound is now pretty much a large scab, it looks like it will close up without needing to cauterize!  He did get a little laser therapy last week, but the technician said at this point it may not have much effect on the wound but it could help bring down the lump/swelling still around it. 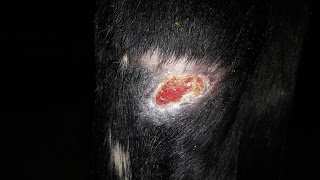 Cupid has had a lot of energy the past few days.  I've also noticed he has gotten a lot more assertive with other horses.  He was always very friendly and liked to go meet other horses, stretching his nose out to them but always keeping his head pretty low.  Now he is more playful and nippy, and tries to keep his head over the other horse's. 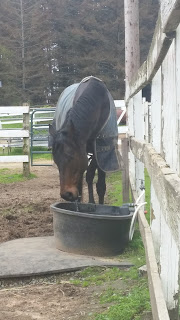 A saddle fitter was at the barn this weekend, so I figured I'd take a look at some dressage saddles since I sold mine recently.  She spent a lot of time measuring Cupid, and remarked how well behaved he was.  But when I took him on the ring and got on, he was super hyper.  I've only been on him a handful of times over the past month, plus the weather had turned cool again after a sunny week, plus the arena had a bit of activity.  So I sat in two saddles, but I couldn't really say anything about them because I was too busy trying to keep Cupid from freaking out to pay attention.  All I could say is that the saddles didn't get in my way, and I felt okay even though Cupid was jigging all over the place.  I felt kind of like how I imagine parents feel when their kids throw tantrums in public!  But the saddle fitter is going to give me the 2 saddles on trial so I can get a better feel for them.
This morning I got on Cupid and we just walked around the property.  He was perfect, stayed relaxed throughout.  We just trotted a few steps.


Posted by Training Cupid at 10:25 AM No comments:

Cupid has been slowly healing and thankfully has not had any setbacks thus far.  Over the past 2 weeks the wound gradually filled in with granulation tissue.  Over the last few days it started looking like it's closing up.  I don't know for sure whether we will have to cauterize it or not.

Cupid has continued being a good patient, but does run around and buck when I let him out.  He really wants friends to play with!  If he sees other horses across the fence he will run along the fence and buck or rear up in front of them to try to get them to play!  Most horses ignore him, but every once in a while he gets one to run along the fence on the other side and I think it makes him happy!


I've gotten on him just to walk around a few times.  Two days ago when I did he was very nervous.  It was a little windy, but I'm not sure if that's why.  We were on a little trail he'd been down a hundred times before.  I could tell he was getting a little anxious, then he started prancing a little and I tried asking him to bend one way then another to get his focus back.  He was just getting worse, then he started popping up a bit on his front legs (hardly an inch) - I decided to just get off and walk him.  But he was spooky and nervous and just chomping on the bit.  I did some groundwork exercises, and he did them but he was not happy.  Every time he got silly I would turn him and walk him the other way, but he just would not relax.  I spent about 45 minutes trying to get him to settle.  I'm still not sure why he was so nervous. 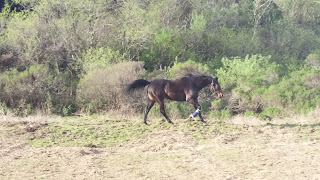 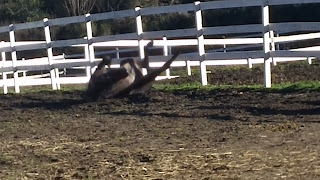 Last week I had a lesson on a different horse.  It felt strange, but it was definitely good for me!  The horse was very nice, and also a little lazy.  But I was a little nervous because I haven't ridden a horse other than Cupid in a while, and I just didn't know what to expect.  This horse was a lot bigger than Cupid, turning him was very different so I had to adjust.  We just did basic walk/trot/canter, and by the end of it I was starting to get used to him a little.
Posted by Training Cupid at 11:48 AM No comments:


I tried a new toy for Cupid, making a hole through a large apple and hanging it in from his stall.  It was funny watching him try to take a bite, but he pretty quickly figured out how to pin it against the bars so he can eat it. 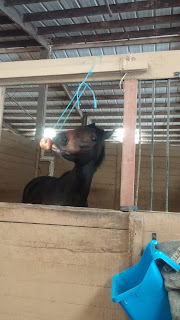 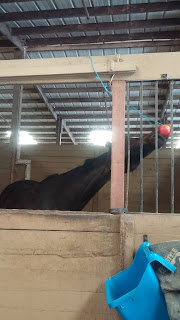 Cupid saw the vet on Friday, and apparently his healing is right on track.  Unfortunately we still have several weeks to go still.  The vet clipped the hair around wound, and though Cupid did not enjoy it he was good about standing.  The vet said we would probably have to cauterize the wound.  I was expecting this, since we did it last time with an almost identical wound.  He also said that a little light riding at a walk wouldn't slow down recovery, just keep it bandaged. 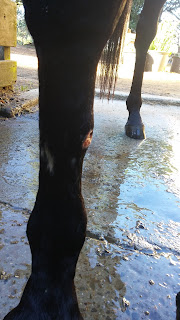 So on Friday afternoon I saddled up for a 15 minute walk around the property.  That was the plan anyways; it ended up being 10 minutes of prancing then 5 minutes walking after Cupid finally settled down.  We had a few iffy moments there, but I tried to sit up and keep my leg on and keep going.  Finally Cupid relaxed and remembered being ridden wasn't such a big deal.

It rained this weekend, and even snowed/hailed a little.  Cupid didn't mind getting hailed on when I brought him out for some grass.  The paddocks had been drying up, but unfortunately now they are pretty muddy again so I won't be able to turn Cupid out because I don't want to risk an infection.
Posted by Training Cupid at 2:12 PM No comments:

Cupid has been on stall rest since his injury.  So far he has been behaving very good, but he is getting a little pent up energy.  I walk him/let him graze at lease twice a day, before and after work.  My trainer has taken him too.  I've turned him out for 10 or so minutes into a small paddock, and he gets excited running around and bucking.  Here are some pictures of him frolicking. 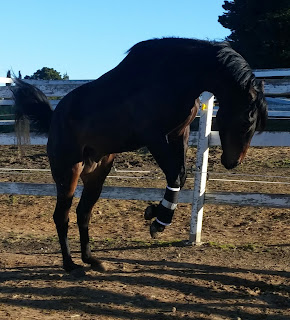 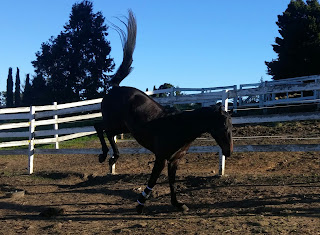 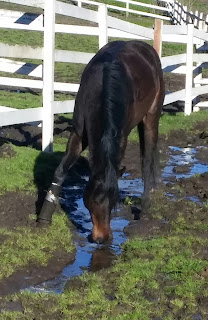 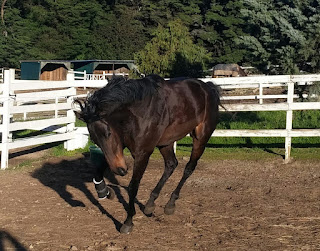 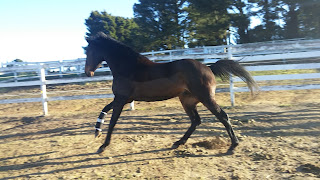 He has been very good about letting me clean the wound and wrap his leg.  But twice I've found him in the morning with his bandages off.  I've never seen him trying to undo it, but they looked secure the night before when I left so I'm not sure what's happening.  Yesterday I added an extra layer of duct tape over the velcro, and this morning it was still on.  He gnawed at one of the wraps that came off, and his cooler blanket, making a series of small teeth holes almost like mice had gotten to it!