I've been very busy with work and a few other things, so I feel like I haven't gotten to ride quite as much lately.  I've still had my two weekly lessons, but only about two shorter rides or a ride and lunge session in addition to that.  But Cupid is continuing to do well and I'm making some improvements too.

We've done one jumping lesson in each of the last two weeks.  I had been nervous about jumping again after such a long break, but Cupid was very good.  Our first time we did about thirty minutes of flatwork, then started with some poles.  First just trotting over a single pole, then adding a second, then a third, then replacing it with a little crossrail.  I'm happy to say the progress we've made in our flatwork is carrying over to our jumping.

This week started with just one little crossrail that we trotted into.  We did it from both directions a few times, then put it up to a small (probably 18 inch) vertical and cantered it both directions.  We were going to do a little course with three jumps, but then another horse came in to lunge and was kind of in the way so we just did the second two jumps, a crossrail and little brush box, as a line.  The focus was primarily on staying relaxed.  If I think Cupid is starting to get quick (which is relative, he doesn't do much) then I start to tense, which makes him tense too.  So before the jumps we did some circles with increasing and decreasing stride, so I can feel confident that he will come down if I ask. 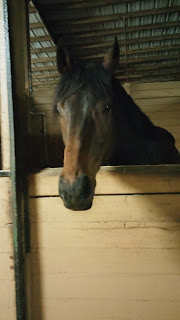 In today's flat lesson we continued to work on bending, and shortening and lengthening the stride.  We also did a good bit of canter work, both on a 20 meter circle including a little spiraling in and out, and around the whole arena.  I'm still working on not leaning forward.  Today I thought about trying to lean back far enough to have my head touch Cupid's back.  Obviously I don't want to actually do that, but just thinking about that got me mostly straight only slightly forward!


Posted by Training Cupid at 2:07 PM No comments:

I've been using my Myler bit on both my bridles.  For my purposes right now I don't really need separate bridles, they are both padded and have flash nosebands, but I have a black dressage bridle to go with my dressage saddle and a brown one for my close contact saddle.  I was going to get another Myler so I don't have to keep changing it, but my trainer suggested I try a loose ring french link for flatwork.  I was worried about a loose ring pinching since I'm not sure my hands are always steady, but she thought Cupid would like it to have a little play.  I decided to try a Herm Sprenger.


I haven't been able to tell much difference in riding him, but at least Cupid doesn't dislike it.  I tried a few different bits when I first got him and he seemed kind of indifferent then too.  But at least now it looks more dressage-y than the dee-ring I had before.

We've continued working on similar things for our flat work - bending, a little leg yielding, shortening and lengthening the stride a little.  I also want to get him outside the ring a little more now that the weather has been nice.  We've only been riding around the property, I want to start gradually riding him further away so he gets more relaxed about it.


Posted by Training Cupid at 3:59 PM No comments:

Cupid has remained sound and healthy.  We still haven't jumped since before his injury but have been making progress with our flatwork, and me on my position.  I have been riding with a longer rein to be able to sit more upright instead of leaning/getting pulled forward, and I think I've been sitting back a little better.

My trainer rode Cupid twice in the week I was gone, and said he was very good though on one of the days he wasn't bending as well.  She suggested I set up his next chiro appointment, I hadn't even realized it's been almost two months already.
One of the things we are working on is riding a 20 meter circle, and then do a little shoulder fore before transitions to get Cupid balanced and using himself.  It is hard for me to think of both maintaining the shoulder fore and asking for a transition, but it does seem to have helped with Cupid being bratty not wanting to trot from the walk.  We also worked on our shoulder fore down the long side.  First just doing it to the inside, then switching from shoulder fore to the inside halfway down the long side and to the outside the second half.  Cupid is pretty good at that exercise.

Another exercise we've done on the circle is changing my posting diagonal every few strides.  This gets Cupid's attention and makes him slow down a little if he's rushing - especially useful after cantering when his trot is sometimes too quick.

We have been doing a few canter laps for conditioning, both for Cupid and I!  Usually he starts out lazy and I have to keep him going so he doesn't drop into a trot, but sometimes he really starts getting into it.

I am hoping we might be able to do a dressage show in June!  But it's coming up quick, I'm not sure I will feel ready....
Posted by Training Cupid at 1:22 PM No comments:

I have been out of town for nearly a week so haven't been able to see Cupid.  Although I didn't get to ride, Cupid didn't get off totally free.  My trainer worked with him twice in my absence.  I only got short texts from her but it sounds like everything went well.  My sister also went out during the weekend to give Cupid his grain and fill up his treat dispenser.  I can't wait to go see him tonight!
Posted by Training Cupid at 5:21 PM No comments: