A Break From Our Normally Scheduled Programming

Cupid's break has officially begun, and his human "little brother" arrived on Thanksgiving day!  The next few weeks he will just get turned out daily.  I've just been grooming him and giving his grain, and putting anti-thrush stuff in his feet since it's started raining.  I talked to our farrier, and we decided to keep shoes on.  I'm also switching him from biotin to Farrier's Formula to see if that strengthens them. 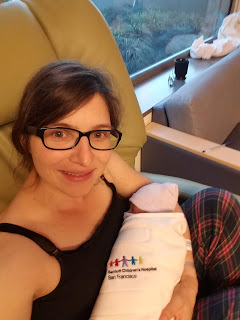 Cupid and I have continued taking it easy.  Even though I don't really notice the smoke anymore, I'm not sure how much better it actually is versus me just getting used to it, so I don't want to push it too much.  Also although we've had some better and worst days, I'm still not convinced he is 100%.  It still is only ever a problem cantering on the left, and not all the time.  It's possible it's just a training/attitude problem, but I'm giving him the benefit of the doubt and not pressing it.  So we've been keeping our rides shorter (generally 30-45 minutes) and lighter, but trying to focus on more prompt responses.

Part of this has been crisper transitions, within and between gaits.  We've also been working a bit on trot-halt-trot for when we move up to First level - this definitely needs work!  I know I also need him more responsive to the leg, so we've been doing leg yielding and playing with some turns on the forehand and haunches, which he's starting to get the idea of.

The other thing I've been working on is improving our connection.  I start with asking for a halt, then use steady pressure on both reins until Cupid drops his nose.  Then I tell him he's a good boy and ask him to walk on while maintaining that connection.  When we start to lose it, we stop and start over. 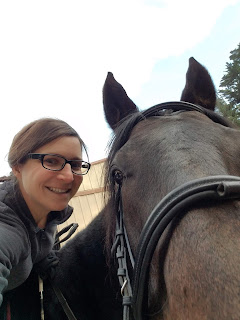 We have rain forecasted for tomorrow, and on and off the next few days.  But it hasn't rained in a while so I don't think it will get too muddy.  But time to start preparing for winter, yuck!
Posted by Training Cupid at 3:52 PM 1 comment:

Though it is still a bit hazy, the air quality has gotten better.  On Sunday I did a light ride, about 30 minutes in the covered arena walk/trot and hopped over a few tiny crossrails.  Cupid was not very inspired by the tiny jumps (a foot tall, max), and didn't even muster a few strides canter on landing.  But I did try to get him going forward and straight as best I can, and also did some leg yields to get him listening to my leg.

I had Monday off for Veteran's Day, so Cupid and I headed out to meet our friend for a trail ride in the Runnymede Sculpture Garden.  We haven't been there in about a year.  A lot of the art is large, industrial-type installations.  (Stuff I don't really get, but I can barely draw a stick figure so who am I to judge.) 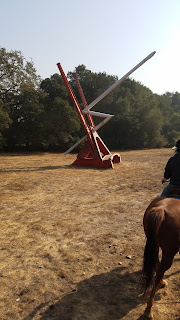 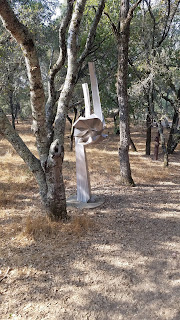 There are also some life-size and larger than life people and animals - a camel, horse, monkey, and more. 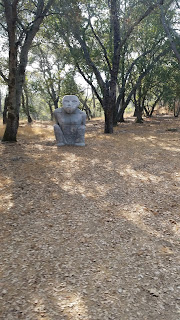 Then there are random ceramics. 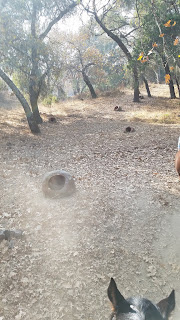 And some stuff I don't even know how to describe. 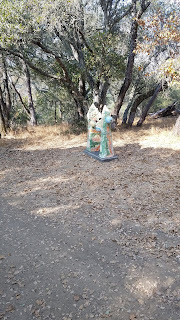 It was a nice, easy ride and for the most part fairly flat. We kept it at a walk.  Cupid paid no attention to the art, but did occasionally try to stop to forage.  He's weird and likes to eat moss.  He also pulled out a giant clump of weeds, then tried to figure out how he can knock the dirt clod off the roots and eat it with his bit on.
We eventually made our way out of the sculpture garden and into Huddart Park.  A part of the trail was fairly steep downhill with several narrow switchbacks.  I was a little worried about taking a bad step, but Cupid was able to navigate through it.  We also did a little gate practice, and as I suspected a real gate was quite a bit more difficult than the rope gate we did for working equitation so it was not pretty but we eventually got it.  Aside from the gate needing more work he was a perfect trail pony!  It was about a 2 hour ride total.  Cupid was a little sweaty, probably from being so fuzzy more so than the actual work.

After the ride I remembered to start my TIP recreational riding log (thanks to http://poorwomanshowing.blogspot.com for the motivation!)  I was able to look up most of our trail rides from the past year from my blog entries, and we are almost at our first milestone to get a badge!
Posted by Training Cupid at 3:21 PM 6 comments: 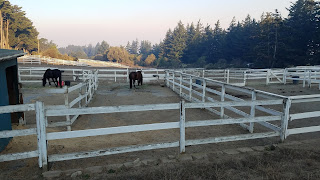 Making up for Lost Time

Cupid got Monday off, and on Tuesday we had a pretty good ride in the covered arena.  He didn't feel quite so lazy, but instead of settling for that I tried to push him for a little more still.  We kept it fairly light, continuing the things we worked on in our last lesson just less small circles.  I decided to just focus on the trot work again and not canter.

Then on Wednesday I rode Cupid in the outdoor arena, and as soon as I got on I could tell he had a little more energy.  It was slightly cooler... or maybe because I've been giving him apples all week :p  We walked a few minutes.  I've been doing some stretches while we walk, rotating/windmilling my arms one at a time, taking my feet out of the stirrups and stretching my legs out long, then lifting my leg out to the side.  The last one is quite painful for me, tight hip flexors, but isn't so bad if I keep my other leg in the stirrup.

After my stretches we did some shallow loop serpentines each direction, then went up to the trot a bit sooner then usual.  And Cupid wanted to go!  So we only trotted a few minutes before I asked him to canter, thinking he would quickly get tired and want to stop.  But he was full of energy!  We cantered on a 20 meter circle and did some transitions down to the trot and back to the canter.  Then we changed directions and we got the left lead, even though Cupid ran into it a little.  We transitioned down to the trot, then when I asked for the canter we got a fairly decent up transitions, yay!  I may have pushed my luck a bit because the third time he picked up the right lead, but we went back down to the trot and then he got it.  I thought three times was good, but then Cupid broke to a trot so I made him canter again.  Overall I was happy with how he felt, though I felt a bit loose and sloppy myself, tipping forward a bit and my heels were coming up and feet out of the stirrups.

Then I let Cupid walk a little to catch his breath, though he was still feeling pretty good.  He was a bit distracted at one part of the arena so we did some small circles as we walked by.  We ended with a fairly long trot set incorporating exercises similar to our last lesson.  Cupid was a bit quick initially but we managed to channel that energy into pretty nice work!