Cupid was x-rayed on Tuesday.  The good news was no fracture or bone cyst.  The bad news is we still don't know why he is lame!  The vet still believes the problem is coming from the stifle.  The recommendation was to put him on stall rest for about 10 days and see where he's at and decide if ultrasounds are needed.  Cupid is a pretty good patient, he doesn't mind being in the stall but then is a little pushy when I bring him out he sometimes doesn't want to stand still.  I've been going out in the morning and after work to let him out to graze and very minimal walk.  Unfortunately it gets pretty warm in the stall during the day.  I need to get him a salt lick, and maybe a stall toy.

Posted by Training Cupid at 10:33 AM No comments:

After my great lesson with Cupid last week, I was really excited to keep building on it.  Unfortunately the following day he was totally lame on his left hind leg.  He wasn't lifting it all the way and the toe was dragging on the ground.  There was no swelling, heat, or tenderness anywhere.  At first I thought maybe his foot was bruised, since he got trimmed the day before the sole was more exposed.  But it looked more like it was coming from the stifle.  At first I thought the stifle was just locked, after doing a bit of reading online I tried backing him up to see if that would unlock it but it didn't help.  The vet came out today and also suspected the stifle was the cause but he could not determine what specifically the issue was.  The options were to either put him on stall rest and see if there's any improvement in about 2 weeks, or more diagnostics.  I opted to have xrays done so the vet will be back tomorrow.  I'd rather know for sure what the cause of the problem is, and then have a better idea how to treat it.  So fingers crossed we figure it out tomorrow, and it isn't anything serious! Posted by Training Cupid at 6:09 PM No comments:

Our main focus right now is working on improving Cupid's steering. He is used to training on a nice wide racetrack where he doesn't have to do circles or change directions much. I've been using the jumps in the arena to weave around - hopefully this also makes our sessions more interesting for Cupid. Last night I laid a tarp out in the arena and rode over it at a walk and trot, which Cupid does perfectly. We still need to work on our canter leads. He doesn't seem to favor one lead over the other, but gets it wrong on both sides quite often! I got a new bridle for Cupid which has a padded crownpiece, brow band, and nose band. He has very thin skin (unfortunately is getting blanket rub on his shoulder) so hopefully this is more comfortable for him. We are still saddle shopping which is getting frustrating. I need to get someone to take some pictures of me riding! In the meantime here is one of Cupid napping after lunch with his buddy Lance looking out for him, and one in his turnout blanket. He lives close to the coast, even though it is summer it can get pretty chilly in the evening. 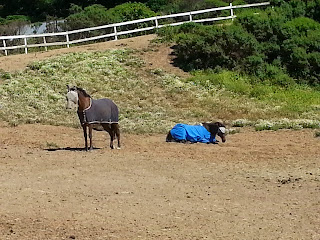 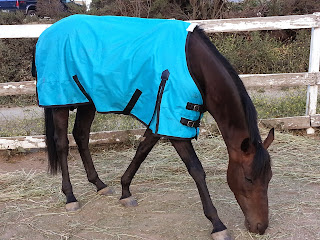 Posted by Training Cupid at 10:58 AM No comments:

Cupid and I had our first lesson with our trainer today. I wasn't planning on doing lessons yet, so we can get to know each other without that added pressure, but we were short on school horses. I told me trainer I wasn't sure if I was ready, and it was kind of like bringing a guy home to meet your parents on a third date. She laughed and said she's already ridden Cupid (when we first tried him out) so she knows what he can do. I was still a little reluctant but tacked him up. I must have been nervous because I put a saddle pad on upside down - whoops! The lesson went pretty well. Cupid was very good, we worked on smooth halt/walk/trot transitions and shortening and lengthening the stride at a trot and he is much more in tune to my seat then I expected. We also went over ground poles. At the end of the lesson we had our first canter. Altough we missed the lead the first time on each side (at least he's not one-sided, right??) it was fun and he has a really bounding, rocking-horse canter.
Posted by Training Cupid at 11:03 PM No comments:

After giving Cupid a few weeks to unwind after racing, I decided we were ready to slowly ease into riding! First I needed to fit him for a saddle, so he will be comfortable and not start his training on a bad note. Lucky for me a saddle fitter was coming out to the barn. I picked up a saddle on trial, but unfortunately it doesn't work for Cupid. Luckily one of my trainer's schooling saddles is a pretty good fit, so I can use that until I find one. 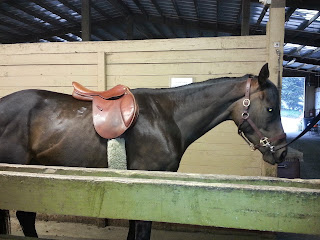 We had our first ride on Saturday, just at a walk and doing walk-halt-walk transitions. Cupid was very good! Although he does not know how to do circles very well I thought he was pretty responsive to rein and leg aids for an OTTB. He whinnied a few times but stayed calm and listened. We kept it short, about 15 minutes, for the first time. No pictures since there wasn't anyone there who can take them for me. I was going to ride again on Sunday but it was so hot I decided to just groom him and let him take it easy.
Posted by Training Cupid at 10:35 AM No comments:

Over the weekend one of my instructors, who practices natural horsemanship, spent a little time playing with Cupid in the indoor arena. She was amazed that a three year old would be so unfazed about walking over a tarp or having a stick with a plastic bag tied to the end waved around him. Cupid is very easy going and doesn't seem to be bothered by much, except on occasion does not like being away from his pasture mates. He was being lazy and did not want to trot on the lead though. After my unsuccessful first attempt at lunging, I have to admit I thought about giving up. I can live with my horse not being able to lunge as long as he rides okay. :p But I did try again. The second time I just clipped the lunge line to his halter. I'm not sure what I did different, but it went a lot better. The circle was more of a blob but Cupid walked and trotted around me both directions. When I asked him to "whoa" he did, and though he would turn slightly in towards me he did not walk in, but he looked like he would rather stand in the middle with me! When Cupid was trotting around me he suddenly seemed like a grown-up horse not a baby. A very handsome horse at that! Since Cupid is pastured with other horses I feel bad about taking him out while they are eating their hay, since the other horses will eat his share while he's out. But it takes them a really long time, over 2 hours, to finish the hay! I went out later than usual last night so he would be done with his hay, but it got darker a little earlier than I expected. I did a brief lunging session in the covered arena (which has lights). I think Cupid was a little more on edge than usual but he was very well-behaved. It was totally dark by the time I took him back to the pasture. Since it was a bit chilly and misty I put his new waterproof turnout sheet on for the first time.
Posted by Training Cupid at 12:34 PM No comments:

Though he still gets an occasional new bite, Cupid is pretty well aclimated to his new home and herd. During his second week I started only coming out once a day instead of twice. Cupid is a very easy-going horse, almost lazy. He is very good being tied now. When I walk him he will occasionally whinny to his buddies but does not appear anxious. On Thursday I decided to try lunging him. I don't think he's every been lunged before. I put a snaffle bridle on him (borrowed, I still need to get one). For his first time I decided not to add any more tack. Since our round pen is very deep I decided to go to the regular arena instead. I started by leading him around in a circle and then slowly moved away from him. It was slow going as he stopped or followed me. I tried to use the correct body language to move him but he was confused and I don't think I was assertive enough as he just wanted to turn in towards me. He is not at all phased by the whip and ignored it even as I tapped his rump. I tried leading him again and moving away slowly, and when he did a few circles I praised him and changed direction. It was the same to the other direction (plus he had to stop to pee too, which is pretty funny because he stretches his front legs way out in front and his hind legs several feet back and is about half his normal height!) I'll have to think of something different to try next time.
On Friday I had my riding lesson on a school horse, then played with Cupid. We walked on a trail which is parallel to the road and adjacent to it at one point, and he was very well-behaved and not concerned about the cars. He whinnied once on the way back but did not rush. We practiced "whoa" (he has to stand still on a loose lead until I ask him to move) and "walk". I think his back may be sore, the last few days when I brushed him he drops his back in certain spots. I don't know if it's from racing and something he did in the paddock. Unfortunately I missed the horse chiropractor who just came out to the barn, but next time I'll add Cupid to the list. 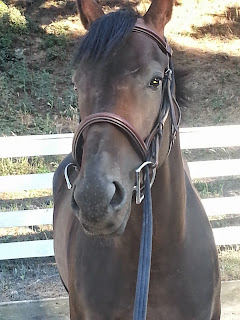 Posted by Training Cupid at 8:34 PM No comments: