We've had a few chilly mornings when I was glad to be wearing fleece breeches, but overall it's been pretty warm.  Cupid was clipped in October, and it seems to be growing back much quicker then in previous years.  I've never had to clip him twice, but we'll see how long and cold this winter will be.

After Cupid's shoe got pulled, I did a CleanTrax soak followed by Animalintex wrap three days and he looked good.  Then it was another day before the shoer came out to replace his shoe.  I had been planning a trail ride on Veteran's Day, but that had to be cancelled so I cleaned my trailer instead.  And lost my phone in the process, so spent the next two hours walking around the property, retracing my steps and looking for the phone.  I gave up, but found it the next day, underneath the trailer next to mine!

Our first few rides back were not great, Cupid was just kind of distracted especially in the outdoor arena.  Luckily he was much better during our lesson today (just some minor staring at, and trying to shy away from, a chair several times as we passed it), it probably helped that there was another horse in the arena.

We ended up having a fantastic lesson!  The contact and roundness have gotten so much more consistent.  I still use the billet strap to secure my outside hand.  Hopefully that will help create muscle memory.  We played a little with trot lengthenings, first on a short diagonal but we were losing roundness so we did them on a circle instead, going between a bit of shoulder in to the lengthenings.  They were a bit too quick at first, so I tried to really focus on slowing my posting down.  In the canter we transitioned between a working and medium(ish).

We ended with leg yields.  They felt a little weak today; Cupid was ignoring my leg a bit and I was overbending him.  So we broke it up into moving off the leg, then straightening, kind of stairstepping down the long side.  They still weren't the best we've done, but overall the transitions and everything else were right up there, my trainer and I were both really happy.

We're going to keep working for a few more weeks, then I plan to give Cupid a few weeks off before we start readying for a show in late January.  I'll be kind of bummed if the nice weather continues during our break, then gets nasty right after!  But I'll be gone for a week anyways, and I don't want it too close to the show.

Posted by Training Cupid at 8:22 PM No comments:

Back to Square One

I thought the pads had been working beautifully for Cupid and foot problems were a thing of the past, but alas last week I found him with abscess-type symptoms.  It was especially surprising because it hasn't rained at all.  I had to call the shoer to pull the shoe and pad so I can treat it.  After a few days of CleanTrax he seems fine now, so we just have to wait for our shoer to come back and replace the shoe and pad. 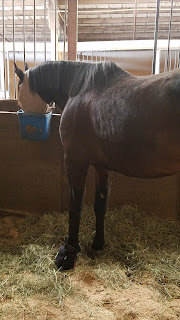 I'm still undecided on whether to keep the pads on over winter or not.  If he keeps getting abscesses regardless then we'll probably take them off.
Posted by Training Cupid at 3:52 PM 3 comments: