We had a dull 2.5 weeks of rest and muscle relaxers for Cupid, with just a bit of ground driving until our re-check.  Cupid looked good and I was fully expecting the doc to say go ahead and ride.  Well it's not all bad news, she says there is definite improvement, but not as much as she hoped.  She watched him on the lunge line, trot and canter both directions, and then with me on him.  He is not lame, just uncomfortable especially when he puts his head up (Cupid only has two modes: giraffe or anteater.)

The recommendation was to keep it light, but every 2-3 days do a light lunge and when he's relaxed ride about 20 minutes.  Trotting and cantering is okay, but keep him in a long and low type frame.  No collected work.  She checked my saddle again, and still thought it looked like a good fit but agreed that adding my thinline pad underneath is a good idea.  She also suggested a round of acupuncture, which neither Cupid nor I have tried before.

The doc is a DVM but primarily does chiropractic work now, and has been seeing Cupid regularly (usually about every 2-4 months depending on his workload and how he looks) since I've had him.  I like that she mixes both eastern and western medicines (ie. she is not afraid to prescribe muscle relaxers, in addition to the chiro and acupuncture.)

Cupid was very good standing while she applied the needles, and then about 15 minutes afterwards with the needles in.  I wasn't worried about the needles specifically but he does generally get bored standing around - but he was super relaxed and happy to hang out.  She put two smaller needles on each side of his neck, and about four longer ones on each side of his back.  She also hit his "ting points" above his hind hooves.  Although I still don't quite understand how it works, it was interesting learning a little about it and I hope it will help Cupid be more comfortable! 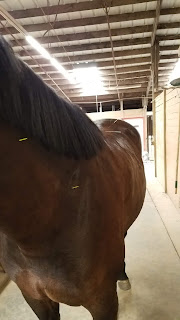 Well I'm a little bummed I'm not going to ride Cupid for 2 weeks, but first I'll start with the positive.  I haven't taken the baby out to the barn in several weeks (it's just easier to leave him home!), but I was alone with him all weekend so we went to go visit Cupid.  And this was the first time the baby seemed to actually notice the 900 lb animal infront of him.  At first the baby seemed a little uneasy as Cupid stretched his nose toward us, then decided it was funny and started laughing.  It was pretty cute! 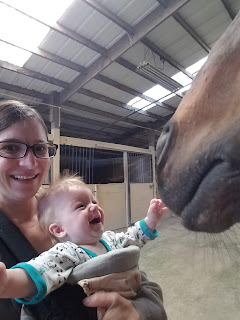 Okay so back to the not riding.  Cupid and I are coming up on our 5th anniversary together.  Even though I'm proud of the progress we've made, I'm a little frustrated that 5 years later we still have a recurring problem with picking up the left lead.  Sometimes it'll be fine for months, then we'll have a week or two when it gets tough - and sometimes Cupid is very calm about it just keeps picking up the right lead but occasionally he gets downright cranky when I ask for the left.  I accept that it might always be his weaker side, but I would have expected he should at least be able to pick it up consistently after all this time.  He feels even trotting both directions and seems about equally developed both sides.  I've talked about it with my trainer and vet, and so far neither has attributed it to anything specific.

So I asked my wonderful chiropractor, who is also a DVM, to watch me ride and see if there is anything we are missing.  I lightly warmed him up before she got there.  Then she asked to see him trot both directions, both on a long rein and with contact.  Then we cantered to the right, on a long rein and with contact.  Then we changed directions and it took a few tries to get the left lead, but once he got it he felt fine to me.  Again we did both a long rein and more contact.  She said he had a bit of a toe drag on the left hind, and looked tight with the contact.

She started adjusting his TMJ and poll, then neck.  She got to his back and said his back was quite sore.  She checked my saddle and said the fit was good, Cupid just strained himself somehow.  So she prescribed muscle relaxers and recommended I put him on magnesium, and 2 weeks no riding but okay to long line keeping him long and low.  She said the sore back explained the tension on contact, and we would have to wait for that to improve before we can really determine what is contributing to the problems with the left lead.

We are in a bit of a heatwave, so if I have to miss riding this is a good time for the break.  It doesn't usually get that hot were Cupid is, on a ridge overlooking the coast, but it's been in the 90s!  The barn gets pretty warm even with the fans in the aisle, so usually the horses stay in turnout longer when it's warm because it's actually a little cooler outside.  I've been giving him electrolytes.  He doesn't really like them, he eats his grain slower but he will eat it.  Cupid's mane is very long and thick right now, I need to tidy it up but for now I've just been doing a quick running braid in the morning to keep it off his neck.

It has been over 6 months since Cupid and I did the working equitation clinic and show, so I was excited to have the opportunity to try it again.  Since last time went so well I was pretty optimistic, and thought we would be able to work on refining our technique.

We started out in hand again.  We took a quick lap around the arena, then I went to the cup obstacle since that's the one we had the most trouble with the first time.  We walked through between the cones once, then halted between the cones.  Cupid seemed fine with it.  We checked out a few more obstacles, and Cupid was perfectly relaxed so I thought we were ready to mount up.

I took Cupid out of the arena to bridle and mount up.  We went back into the arena and started walking around, perfectly calm.  Then Cupid's nemesis appeared - the leopard appaloosa from last time!  Not sure why they were in the arena since they weren't in the clinic, or why they were cantering around when everyone else was walking, but it doesn't really matter.  I don't know if it was me or Cupid, but things got a little tense and ugly for a while.  I tried trotting Cupid on a circle to get him settled, no dice as the appy continued cantering around.  They finally left the arena, but it took a long time for Cupid and me to get relaxed again.  I can't relax until Cupid does, and he can't if I'm pitched forward, it's an ugly cycle!  Cupid was still totally fine with the obstacles themselves (even when during the ring joust I accidentally tapped his rump with the pole), but our trot was quick and unbalanced and our down transitions late.  Which is why working equitation is so good for us, it's really just working on the basics!  Eventually we both started to relax and have fun.

We started by going through the obstacles one by one.  The one thing we could use a little more work on was the gate.  We were able to get through it, but it's hard for me to move his haunches and back up with only one hand on the reins. 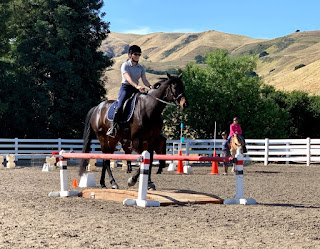 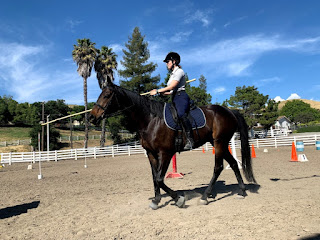 We ended with going through the whole course like we would in a show - trotting between all obstacles.  Cupid was totally relaxed, down transitioned smoothly, and was bending and listening.  Even though we had a bit of a rough beginning, I was really happy with how we ended things!

I just need to keep working on staying relaxed even if Cupid isn't, and not letting him dictate the tempo. 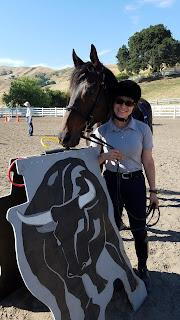 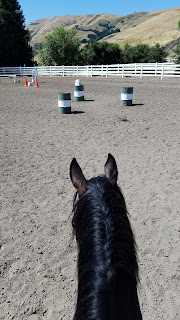 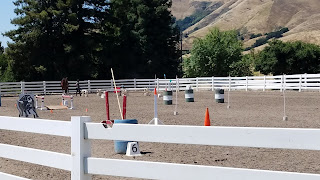