In many ways we've been very lucky this year with no medical problems aside from a few minor scrapes.  No thrown shoes or abscesses, he's been holding weight and building muscle in all the right places, and his coat is shiny.  In the spring Cupid felt light and willing and I saw First level on the horizon.  But for a while I felt like we were just treading water, not moving forward.  And then lately I've been feeling frustrated that we have to work twice as hard and not even get quite the same result.  Cupid is not lame, he's picking up both leads, but something just feels not quite right.

It may just be in my head, but for peace of mind I scheduled an appointment with our vet.  He watched Cupid trot on hard ground, did flexions, and then watched Cupid on the lunge at all gaits in softer footing.  The vet agreed that Cupid isn't lame but saw what I meant about him looking a bit restricted in the canter.  But nothing obvious about what is bothering him - maybe just unloading his right front a bit early but the vet said that was being picky.  The vet didn't think it was coming from his neck, back, or SI.  Possibly feet or hocks.  We decided to start with a bute trial, and then xray the feet coinciding with his next farrier appointment.

We started the bute trial, and I didn't notice an immediate change.  (Paste bute is really hard to get out of the tube, I'm not a fan!!)  But then I checked my calendar and confirmed with our shoer that Cupid's next appointment was actually that week so we ended the bute trial early. 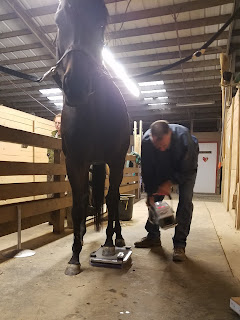 The feet xrays actually look terrific - better angles and a bit more sole compared to his last set 4 years ago!  The coffin bone was what we really wanted to see, and it was fine.  So good news/bad news that we could rule that out.  Since the farrier was there too he discussed it with the vet, and they agreed to try setting the shoe back just a hair and try half rounds.

The vet said if the shoes help he would expect to see a change around two weeks.  OK to ride as usual for now, see how things go and depending on that we might re-do the bute trial, and/or try Legend.

Posted by Training Cupid at 1:53 PM