Back in the Ring

Cupid and I did our first show in several months!  It was at a venue we hadn't shown at before.  With these two factors in play, I decided to enter Training 1 and 2 - start with a short easy test to get a feel for the ring.

I was expecting a 4am wake up, but it turned out my rides weren't until 2:30 and 3:30 so I had a leisurely morning.  I was very happy with how my braids turned out (I know it's tradition, but ... as you can see in the photos I braid on the left - Cupid's mane naturally lies to this side, and I somehow just got used to braiding there and now it feels weird trying to do it on the right!) 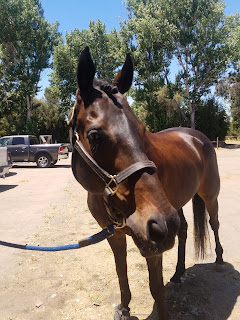 I got to the show grounds around noon and let Cupid snack on his hay while I looked around.  The show arena was mostly hidden behind bushes.  There was a covered arena, plus an uncovered dressage court you could warm up in and the secretary told me there was a third arena where you can lunge.  I tacked up and headed towards the lunging arena, which was another dressage court, and to my dismay had sprinklers on.  So I walked Cupid around a bit, then headed back to the lunging arena.  Now the sprinklers were only on the back half, so I lunged Cupid in the front half even though it was a little sloppy.  Cupid was well behaved on the lunge, and moving quite nicely with the side reins.  If only I could hold my reins that steady...

I glanced at the scores from the morning, and to my dismay saw lots of 50s and low 60s - very unusual for our area.  Now I didn't actually see any of these rides, but I had to assume the judge was maybe on the stingier side.  At this point part of me was thinking if my warm up doesn't go well maybe I'll just pack up and go home!

I decided to warm up in the uncovered arena, since it was most similar to the show arena.  It was warm, but thankfully not too hot.  The warm up had tall bushes along one long side, and the other long side was on the main driveway where horses and the occasional rig passed by.  Surprisingly Cupid was not very distracted in there, and I was pretty pleased with how he felt in warm up.  And then we headed to the show ring and T1 felt like a tense, distracted mess.  Cupid broke gait several times, and picked up a wrong lead.

I was a bit tempted to lunge the ____ out of him before our second test.  But my rational side took over - he hadn't been showing excess energy on the lunge or during warm up so perhaps there were some other things we should work on.  I took him back to the trailer and offered him water and a little break.  I got on him with just under half an hour to my second test and tried to focus extra hard on making sure my reins weren't slipping too long, that I was sitting up straight, and keeping my heels under my hips as we did lots of transitions and light lateral moves.  Then we went back to show ring and had a much improved second test! 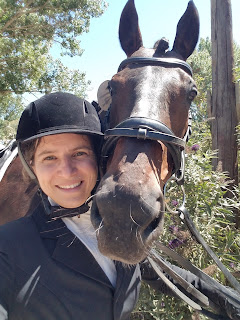 At the end of the day the high point for all levels and divisions was only a 69 - probably the first show I've been to where no one broke 70.  So I was quite happy with my scores - 58 in the first test (which was actually better than I was expecting regardless of the judge), and 62.4 for the second one.  But more importantly I was very happy with how well Cupid handled himself at a new place after not showing in several months.  And I was happy with myself for letting cooler heads prevail and making good improvements.  Of course after watching my video I still see many things to work on but it's finally starting to feel like it's coming together!

Posted by Training Cupid at 3:51 PM