A Day at the Vet Clinic

First rest assured that my long, unexplained absence from blogging has nothing to do with either Cupid's or my health.  Just busy, with not a lot of actual developments and feeling a bit burnt out.  But I did want to write about my experience taking Cupid to the vet clinic.

We are fortunate to have a top-notch clinic with a full surgical suite locally available.  Over 20 years ago I got to tour this clinic with my pony club, and very thankfully I have not had to go back since.  I have been very lucky that in my 30 years of horse ownership with multiple horses, I've never had anything really serious happen to either my horses or myself.  (Knock on wood!!!!)

Cupid was scheduled for an outpatient procedure to get that mass on his leg removed.  Unfortunately he had knocked it again, so I decided it was probably past time to get it taken care of.  Cupid was able to have a light breakfast at home, and we got to the clinic a little before 9am where he had a stall ready.  He had an initial examination and xrays, and bloodwork done, and was cleared for surgery and less than an hour later he was getting a catheter placed. 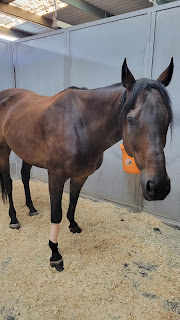 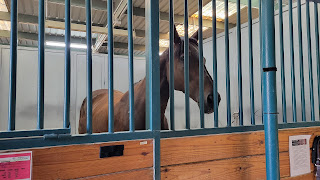 By 10:30 he was getting led into the surgery suite.  Unfortunately I could not watch (or maybe that's a good thing!), but my regular vet did come by and took a look and gave me an update!  I made myself comfortable on the patio and did some work.  They also had a conference room, and coffee and water available and wifi, so aside from worrying a bit about your horse it's not a bad place at all to work remote!

The head surgeon came out just after noon, and told me everything had gone well.  Initially they were not sure if they would be able to close the incision fully, and even mentioned possibly doing a skin graft.  But luckily they were able to close it up, even though I was told the stitches may not hold.  Cupid got a few hours in the stall to recover from the anesthesia, then he was sent home with bute and antibiotics.  He will be in his stall the next 2 weeks until the stitches come out, with a few hours turnout in a small paddock allowed as long as he behaves.

Cupid's leg was already wrapped when I saw him post-op, and that bandage will stay on for about 72 hours and then my regular vet took a look and changed it.

Luckily the injury/surgical site is not near any joints or tendons/ligaments, and Cupid should make a full recovery relatively quickly.  Fingers crossed for no surprises!

Posted by Training Cupid at 1:35 PM